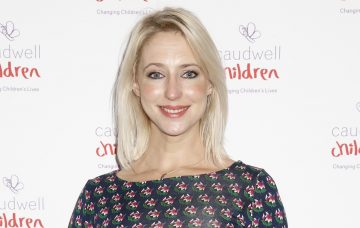 Her fiancé used to have her poster on the wall at university!

And it’s a dream come true for David, who has revealed he used to have Ali’s poster on his bedroom wall at university!

The loved up couple shared their happy news in the new issue of OK! magazine, after fellow actor David popped the question on his birthday.

Ali, 36, added: “Even though we’d discussed marriage, it took me completely by surprise. I still think, has this really happened?”

The couple have been together for around 18 months.

Ali told the mag they’d ideally like to have three different celebrations, including a blessing in Bali, where they recently enjoyed a romantic holiday.

She shared two beautiful throwback pictures from Bali at sunset to Instagram yesterday, captioning them with love heart emojis.

Ali is best known to many for playing teacher Becca Dean in the Channel 4 soap, Hollyoaks.

She appeared on the show between 2001 and 2007, with her character’s most prominent storyline being an affair with her student, Justin, which in a jail sentence. Her character was stabbed behind bars by another inmate and died in jail.

After leaving Hollyoaks, Ali went on to appear on the seventh series of Strictly Come Dancing in 2009.

She was partnered with professional dancer Brian Fortuna, and made it all the way to the finals, where they lost out to winners Chris Hollins and Ola  Jordan.

Congratulations to Ali and David!

Do you miss Ali’s character, Becca, in Hollyoaks? Leave us a comment on our Facebook page @EntertainmentDailyFix and let us know what you think!