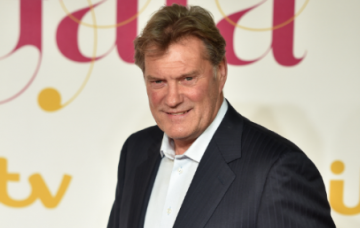 He was taken ill at the BT Sports studio

Glenn Hoddle is reported to be in a serious condition in hospital after falling ill at a TV studio this morning.

Glenn, 61, who is the former manager of the England team, and also of Tottenham football club, had been working as a pundit on BT Sport when he was taken ill.

The show, BT Score, was cancelled because of his condition.

One of the show’s presenters, Jake Humphrey took to Twitter to confirm that Glenn had become unwell while working at the studio, and that the show would not go ahead.

He wrote: “Our friend & colleague Glenn Hoddle was taken seriously ill at the BT Sport studio this morning.

“For that reason there will be no @BTsportscore – but we will be live as usual for the 5.30 ko at Leicester. Everyone of us is right with you Glenn, sending love & Strength.”

Other sports personalities were quick to react to the news, and send their best wishes to Glenn.

Gary Lineker, the Match of the Day presenter and former Tottenham and England striker tweeted:

“Hugely worrying news that Glenn Hoddle collapsed at the BT studios earlier. Thoughts are with him and his family. Come on, Glenn.”

The worrying events unfolded on the sportsman’s 61st birthday.

In his footballing career, Glenn played for Tottenham, Monaco and Chelsea, and was capped 53 times by England.

He went on to manage Tottenham and Chelsea, as well as Swindon, Southampton and Wolves. He was made the England manager 1996 and led the team the second round of the 1998 World Cup in France, where they lost on penalties to Argentina.

In 2008, he founded the Glenn Hoddle academy in Spain which he set up in memory of his brother Carl, a former Tottenham Hotspur player who passed away aged 40.

Glenn’s most recent work has been as a football pundit and TV presenter, appearing on ITV Sport as well as the BT Sport channel where he was taken ill today.

Glenn has three children, Zara, Jamie and Zoe from his first marriage to Christine Stirling, who he was with from 1979 to 1998. He went on to marry Vanessa Colbourn in 2000, but split from her in 2015.

Is Glenn one of your all time footballing heroes?  Leave us a comment on our Facebook page @EntertainmentDailyFix and let us know what you think!