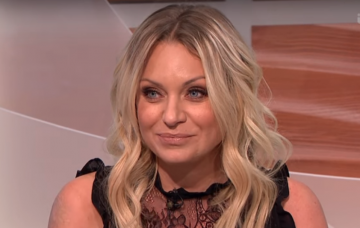 Ex EastEnders actress Rita Simons has been linked with a trip Down Under for the upcoming series of I’m A Celebrity.

The Sun claims the former Albert Square favourite – whose character Roxy Mitchell was killed off at the start of 2017 – is in talks to head to Oz in November for her first stint in reality TV.

Just days ago the 41-year-old told her near 400,000 followers on Twitter she is extremely happy “working on other things” after slamming rumours she was craving a soap comeback.

She tweeted: “If I read one more headline saying I’m ‘desperate’ to come back to enders…well I won’t do much to be fair.

“For the record I LOVED my time there but I’m SUPER happy working on other things! As you were.”

And although she admitted to not having “made peace” with being axed from the BBC soap in June, Rita denied being “bitter” over the widely-criticised storyline which saw Roxy and her on screen sister drown after Ronnie’s wedding to Jack Branning.

“I wish they hadn’t killed us off,” she told the Daily Star Sunday.

Earlier in the summer Rita also revealed extreme anxiety has left her struggling with insomnia – which could cause her difficulties if she take part in the Bushtucker trials in I’m A Celebrity.

She told the Daily Star:  “I suffer with a million ‘isms’, including ADHD. I also have really bad insomnia. The worst is when I can’t sleep at all and I’m up all night.

“Some nights I’m awake just staring at the wall. I don’t even watch TV or listen to music. It is awful. It is like torture. Sometimes it feels like I don’t sleep for days. It’s horrible.”

A unnamed source is reported to have told The Sun: “Obviously it will be hard for Rita to live in the jungle with her health problems but she’s hoping that some time away from her hectic lifestyle will help and that it will also provide a career boost and hopefully lead to her landing another big TV part.”

Since leaving Walford, the award-winning soap favourite has starred in a UK tour of Legally Blonde The Musical with former X factor star Lucie Jones.

She has also appeared on the big screen in The Krays: Dead Man Walking alongside fellow ‘Enders star Leslie Grantham and The Bill legend Christopher Ellison.

An ITV spokesperson confirmed to ED!: “Any names suggested are just speculation at this stage.”

A rep for Rita has been contacted for comment.