Former EastEnders actor Thomas Law, who played Peter Beale, has showed he's a world away from little Peter in a new Instagram snap.

The star posted a topless picture to his account, wowing fans with his ripped body!

#tbt to when I listened to everything that @zacefron told me, lol

He captioned the post: "#tbt to when I listened to everything @zacefron told me, lol."

#tbt to when I listened to everything @zacefron told me, lol."

One wrote: "That's ridiculous. Are you a cyborg?!" with a heart-eyed emoji.

"You look incredible. A lot of hard work going into that!" added a third. Others commented: "Fit," and "Wow."

Someone else requested his return to EastEnders: "If Peter Beale comes back to the Square one day then it needs to be you playing him," they said.

Fans of EastEnders will remember Thomas played Ian Beale's son from 2006 till 2010.

He left in 2010 to go and stay with his twin sister Lucy, who had gone to live in Devon with their grandmother. 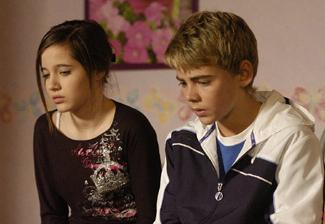 When the character returned in 2013 he was played by Ben Hardy.

Since leaving EastEnders, Thomas has had TV and film appearances.

In 2013, he had a role in Simon Pegg and Nick Frost's third and final installment of the Three Flavours Cornetto Trilogy, The World's End.

The film was directed by Shaun of the Dead and Hot Fuzz director Edgar Wright.

The following year, Thomas appeared in an episode of Casualty.

In 2016, Thomas starred in A Cinderella Story: If the Shoe Fits alongside Disney Descendants actress Sofia Carson.

It now seems like Thomas is focusing on his music as he's posted some clips of him playing guitar and singing on his Instagram page.

A short clip of my singing a song that I wrote called “27 Years” when I was 19. • • Feel free to check out the full version on my YouTube. #thomaslaw • • It’s a special song to me. I don’t get to perform it as I don’t play live very often, if at all. So I thought a version of me playing it in my kitchen now a few years later would suit @youtube for whoever wants to see it, wherever you are around the world. Please enjoy. • • #27Years #fender #telecaster #telecastercustom #orangeamps #orangeamplifiers #youtube #amywinehouse • • Thank you in advance! 🙌🏻

Read More: EastEnders fans WANT Martin and Sonia to get back together after he tells Stacey he slept with his ex

Madeline captioned the post: "Peter and Lauren bump into each other at a wedding 8 years later."

Do you think Thomas looks different since his soap days? Leave us a comment on our Facebook page @EntertainmentDailyFix and let us know!