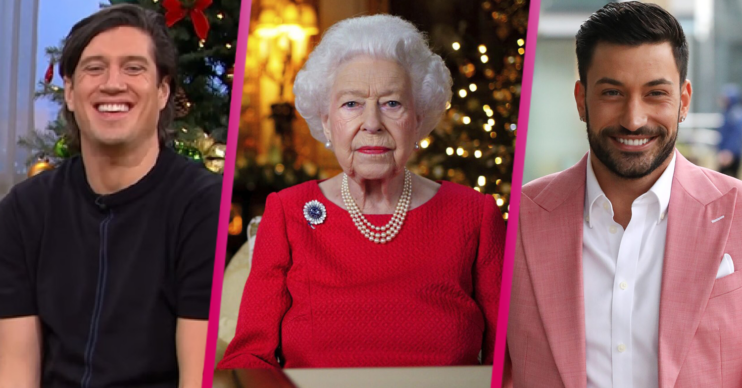 With the year coming to a close the Queen is readying her New Year’s Honours List  and it’s it’s time for ED! to round up our heroes of 2021.

The year 2021 has seen star turns from dancers, actors, singers and medical professionals.

So here, as we get ready to wave goodbye to the year that was, we honour those who brought light, love and laughter to the past 12 months.

He lifted the Strictly Come Dancing Glitter Ball trophy but even that honour isn’t high enough for the lovely Giovanni.

We watched as he grew into a new man over the course of the series, which saw him partnered with Rose Ayling-Ellis.

Gone was the ladies’ man persona of the past and in its place was a changed man – kind, caring, compassionate and that made him sexy as hell.

He’s had quite the career resurrection after his stint in 2020’s I’m A Celebrity, but this year, especially in the latter stages, Mr Tess Daly really came into his own.

Vernon took over on This Morning while Phillip Schofield was off and, whether he was partnered with Rochelle Humes or Josie Gibson, he really was just brilliant.

A true natural presenter, especially when interviewing his own wife, surely bigger things – and a bigger role on This Morning – are coming in 2022 for Vernon.

Usually reserved for the competition or jokey segments, Josie Gibson went down a storm when Holly Willoughby called in sick and she had to cover on This Morning last minute.

Despite not being a presenter by trade, Josie won viewers over with her warm, likeable nature.

Finally This Morning bosses have seen what Big Brother fans have known all along – Josie belongs front and centre on our TV screens.

The EastEnders star is more than deserving of a place on our list alongside the lovely Giovanni.

What she did on that Strictly dance floor rightly got all the praise it deserved.

Not only did she win the Glitter Ball trophy but she raised so much awareness for the deaf community.

Search for British Sign Language soared, we saw more BSL on TV than ever before and Rose showed that a disability should never hold anyone back.

It’s been a rough year for the monarch, yet still she’s led the nation with dignity and courage.

She lost her husband, her grandson quit as a senior royal and her family were rocked by Prince Andrew’s sexual assault allegations.

Still, though, the Queen showed her stoicism, reflecting on her tough year in her Christmas Day message and looking forward to next year when she celebrates her Platinum Jubilee.

Good Morning Britain presenter Kate Garraway has had another tough year in 2021.

She spends her time away from work nursing him back to health, has made special adaptations to her home and kept things as normal as possible for her two kids – all while calling out Government ministers on GMB.

England’s chief medical officer has become a trusted voice of reason during the course of the pandemic.

But it seems that’s especially the case this year if a sneak peak at the Queen’s New Year’s Honours List is anything to go by.

It’s reported that he’ll be given a knighthood when the list is revealed on Friday (December 31).

Another morning TV star who’s worth more than just the competition segment.

Just like Josie Gibson, Andi Peters took his chance to shine when he was offered the limelight in both Phillip Schofield and Lorraine Kelly’s absence.

He went down a storm with viewers, so surely it’s only a matter of time till ITV promotes him to a more prominent role?

Despite battling an incurable brain tumour, The Wanted star Tom Parker has kept upbeat and kept up with his work commitments in a bid to provide for his young family.

Not only that, but the heroic star also seems to have kicked cancer into touch.

Before Christmas he broke the news that his tumour was now stable.

And, not only that, Tom revealed that he and wife Kelsey are hoping to add to their family in 2022.

Naughty Boy may be a controversial inclusion on our list, but he kept the camp fed and, love him or hate him, he kept us more than entertained.

He did countless trials, bringing home the bacon (although not literally) for his I’m A Celebrity campmates, and left us in fits of laughter with his antics during the Bushtucker Trials.

I’m A Celebrity 2021 just wasn’t the same without him.

You’ve seen our 2021 heroes, now who would you like to see in the New Year’s Honours List? Head to our Facebook page @EntertainmentDailyFix and tell us what you think of our story.