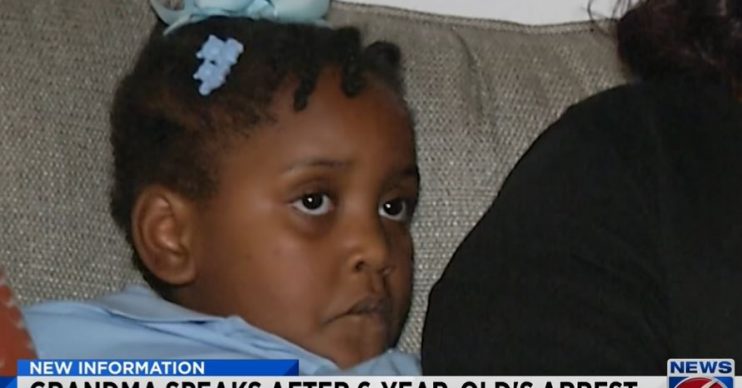 A police officer was fired after arresting a six-year-old who misbehaved at school, with bodycam footage showing the girl crying as she begged to be given a “second chance”.

First-grader Kaia Rolle was reportedly arrested in September on a battery charge after, according to her grandmother Meralyn Kirkland, throwing a tantrum at her school in Orlando, Florida.

When the girl’s treatment was criticised, Orlando Police Department apologised and the arresting officer, Dennis Turner, was fired, BuzzFeed reported.

A video released by lawyers representing Kaia’s family shows how events unfolded when the girl was taken into police custody.

In the clip, sent to ED!, Dennis steps into an office where Kaia is sat with a school employee.

Dennis, who at the time was on on duty as a school resource officer, says in the clip, “Come over here” and Kaia, seeing some cable ties, asks him, “What are those for?”

When her hands are tied behind her back, Kaia starts crying and screaming, “No, don’t put handcuffs on!”

She pleads with the officers to let her go as she’s led from the building, and when she sees the police car waiting outside she sobs, “I don’t want to go in the police car” and the officer tells her, “You have to”.

Kaia then begs them: “No, please, give me a second chance. Please, please just let me go.”

According to BuzzFeed, officials confirmed that Dennis arrested another school child, also aged six, in a separate incident on the same day.

No six-year-old child should be able to tell somebody that they had handcuffs on them.

The police department he worked for has said he did not follow official policy that requires approval from a watch commander before arresting anyone under 12 years old.

According to local paper the Orlando Sentinel, Dennis claimed in an arrest report that, prior to being arrested, Kaia had punched and kicked employees at the school.

Following the incident, the girl’s grandmother Meralyn fought back tears as she said, in a report published by WKMG News in September: “No six-year-old child should be able to tell somebody that they had handcuffs on them, and they were riding in the back of a police car and taken to a juvenile center to be fingerprinted, mug shot.”

Kaia has reportedly joined a different school since and attended weekly meetings with a counsellor.

And Orlando Police Chief Orlando Rolón said the force has implemented a number of changes to make sure a similar incident doesn’t happen again.