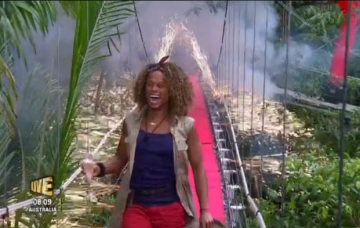 She missed food the most!

Fleur East is the latest star to leave I’m A Celebrity… Get Me Out Of Here! and she says the first thing she is going to do is eat a “dirty” pizza!

Fleur is the eighth celebrity to be voted out of the jungle, leaving Emily Atack, John Barrowman and Harry Redknapp in the final.

When Holly Willoughby asked Fleur if the experience was what she expected, the 31-year-old replied: “It was nothing like I expected. It was a lot harder than I thought, but so rewarding as well.”

She said her campmates now feel like family, explaining: “We made so many good friends in there, we became like family.”

The former X Factor star said she has missed food the most and is now looking forward to some calorific takeaways.

She confessed to Holly, 37, and 43-year-old Dec: “We were imagining all the dirty things we are going to eat…dirty pizza and a dirty burrito!”

She also admitted she was “terrified” at doing every Bushtucker trial but is so “glad” she did them to win food for her campmates.

During her exit chat, the singer revealed she is rooting for 71-year-old Harry Redknapp to win.

“I would love to see him crowned king, it would be amazing.”

Tomorrow’s I’m A Celebrity… Get Me Out Of Here! final will see either Harry, John or Emily take the jungle crown.

Who do you want to win? Leave us a comment on our Facebook page @EntertainmentDailyFix and let us know what you think.