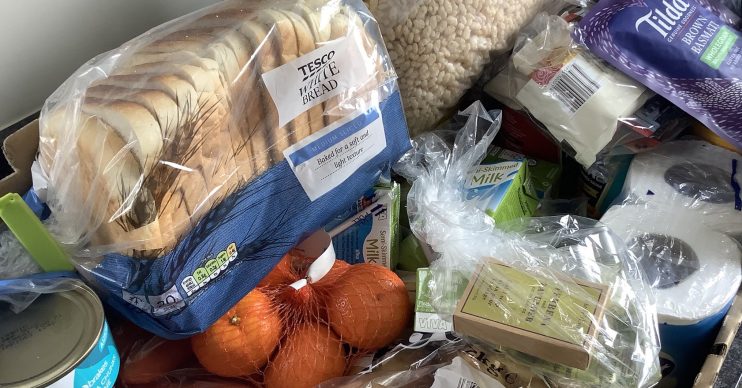 Coronavirus: Government’s first food parcels are delivered to the UK’s most vulnerable

The first government food parcels have been delivered to those considered most vulnerable.

An initial 2,000 food parcels were delivered to the doorsteps of those in isolation for 12 weeks due to the coronavirus pandemic.

The government said it expects to deliver 50,000 of the food parcels this coming week.

However, with 1.5 million people instructed to isolate for three months, the number of deliveries will no doubt rise.

Read more: It could be “six months” before the UK returns to “normal”

He said the deliveries are just the start of the government’s “extraordinary steps to support the most clinically vulnerable”.

This weekend we began delivering parcels to some of the 1.5 million people extremely vulnerable to #coronavirus We promised that whilst you are at home, you would not be alone. If you have a medical condition identified as putting you at high risk, visit gov.uk/coronavirus-ex…

He added: “We will support these people at this difficult time, and the scale of an operation like that has not been seen since the Second World War.”

The packages contain essential food and household items such as pasta, fruit, tinned goods and biscuits.

They are intended for those who need to self-isolate at home for 12 weeks but have no support network of family or friends to help them.

A big thank you to the cheerful volunteer who kindly delivered the government food parcel this morning.

Some of those who have received the food parcels have posted pictures of them on Twitter.

The boxes appear to contain fruit and veg such as carrots, onions, potatoes and satsumas.

Bread, rice, pasta, breakfast cereals and long-life milk is also in the box.

There are also treats such as biscuits, which could be enjoyed with the included tea and coffee.

The boxes also contain essentials such as toilet roll.

We have been Shielding since St Patrick’s Day – a big thank you to the cheerful volunteer who kindly delivered the Government food parcel to our doorstep this morning 👍🏻#FoodGloriousFood pic.twitter.com/fbJ8LrWFcm

There are also tinned goods including soup, baked beans and canned fish such as tuna.

“Just received a food parcel from Boris and his crew,” said one recipient.

“I am very impressed and grateful, well done!” they added.

Another said: “Well done @BorisJohnson for taking care of the poor and vulnerable. The free food parcel that arrived for my friend from the government today was excellent.”

“We have been shielding since St Patrick’s Day. A big thank you to the cheerful volunteer who kindly delivered the government food parcel to our doorstep this morning,” said another.

Others said the food parcel was “definitely enough” to keep them going.