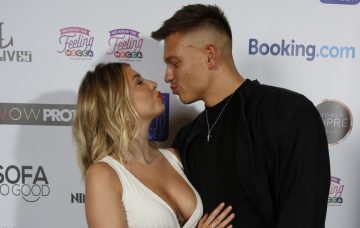 Love Island celebrates its first ever wedding this weekend

Alex and Olivia got married yesterday

Alex Bowen and Olivia Buckland have officially become the first Love Island couple to get married, after tying the knot yesterday.

The pair were runners up in the second season of the reality dating show, coming in second to Cara De La Hoyde and Nathan Massey, who are now engaged.

The couple held their wedding at the lavish Gosfield Hall in Essex, surrounded by their friends and family.

The pair have been keeping most of the wedding details under wraps – although there have been a few hints on social media over the last few days.

Olivia shared a photo of an impressive bouquet she’d bought for her mother as a pre-wedding thank you.

The image was captioned: “Just a quick hand delivery of the biggest bunch of flowers to my Mummy/Wedding planner. Thank you 💕💝”

On Friday she shared a photo of herself getting ready for a day of beauty treatments, saying: “Pamper day today 💅🏽…#weddingprep”

Alex kept his own prep a little more hidden – although he did offer his fans a discount on his clothing line, Exempt Society, saying the offer was “to celebrate the weekend of my wedding”.

The pair also both shared a trailer for the upcoming wedding special, Alex and Olivia Said Yes, which is set to air on TLC in a couple of weeks, with Olivia saying, “OH MY OH MY OH MY. This is something else. Crying,” as she posted the trailer.

It’s not clear if Olivia’s Love Island BFF Cara attended the wedding – after she was asked to step down from being a bridesmaid.

In her New! Magazine column, Olive claimed the decision was welcome, as Cara was too busy with her new baby Freddie.

“She was really happy about it and said it was nice to hear that I thought about it like that,” Olivia said. “You don’t have to be a bridesmaid to know that we are good friends.”

But Cara gave a different picture of the situation in an interview with OK! Online, claiming she was hurt by the decision and casting doubt on whether she’d still attend the wedding as a guest.

“I don’t think I could do that to someone and still expect them to come to the wedding,” she said. “I think it’s a bit embarrassing.”

Will you be watching the wedding special? Let us know what you think of this story by leaving us a comment on our Facebook page @EntertainmentDailyFix!