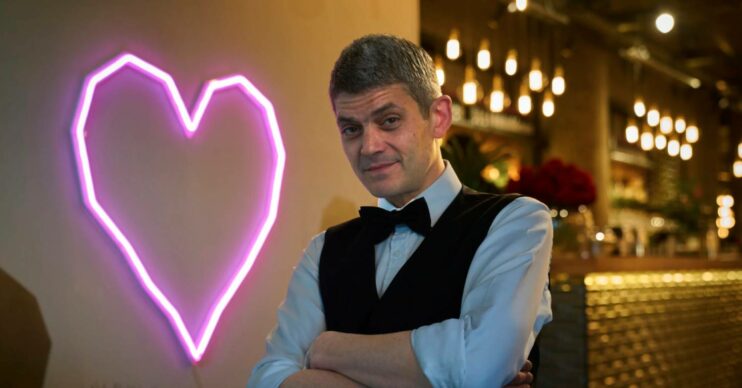 We wish him a speedy recovery

First Dates star Merlin Griffiths has provided an update on his treatment for cancer and has detailed his “horrific” chemotherapy.

The telly fave, 46, revealed in September that he had been diagnosed with bowel cancer.

And now he’s shared an update with fans.

Well there's a new #cancer side effect… Months of chemo have messed up my hands, now my phone refuses to acknowledge my biometric fingerprints! 😂

What did First Dates star Merlin say about his condition?

Taking to Twitter, Merlin said: “Well there’s a new #cancer side effect… months of chemo have messed up my hands, now my phone refused to acknowledge my biometric fingerprints! [cry-laugh emoji].”

It was then fans got in touch to share their own experiences and offer their support.

One fan got in touch to sympathise and empathise with Merlin.

Gillian said: “Gave me pins and needles in my hands and they burn in the bath?”

Merlin then replied: “Neuropathy. Had that too!

“Thankfully off the IV chemo now, found it horrific, knocked me for six.”

What did fans say in support?

One said: “I didn’t know you were going through this Merlin. I am so sorry, you are a joy. Sending love for a speedy recovery x”

Another added: Merlin I wish you and yours all the happiness of the holidays [red heart emoji]

“Getting into your apps in underrated. You are an absolute joy to watch on first dates thank you for your beautiful energy. I wish you well in your cancer fight.”

A third wrote: “Hi Merlin, just want to wish you all the very best for a good recovery mate #topbarman.”

Finally, a fourth fan said: “Oh I’m sorry to read this, I hope the treatment is working x.”

What was Merlin diagnosed with?

Merlin revealed the news after he complained of bloating and nausea.

Following x-rays, CT scans and a sigmoidoscopy, a 4.5cm, stage-three tumour was found in his lower intestine.

However, it had not spread and Merlin began a course of chemotherapy treatment.

Doctors have told the star that he has a 75 per cent chance of living more than five years.