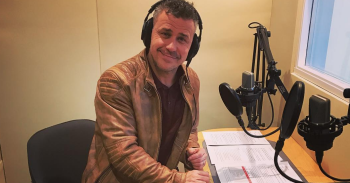 Builder and Big Brother winner Craig Phillips has welcomed his first child, sharing pictures of his new daughter on Instagram.

Craig has introduced the world to Nelly, his first child with wife Laura Sherriff, who was born on March 8.

“Yesterday our beautiful Nelly was born at 17.56 on International Women’s day,” she said.

“Nelly’s entrance into the world probably has to be the most intense and powerful moments of my life. That being said I have to say that it was the most magical and positive birth I could have ever dreamed of.”

The photo – which Craig also posted to his Instagram account – showed Nelly facing backwards in a car seat as the new family left the hospital for the first time.

Since then, Craig has posted a few shots from his first days as a father, highlighting the new adventure.

He posted a shot of himself trying to buy nappies for Nelly, mocking his own confusion.

Rather than give a caption to the image, he simply posted a string of hashtags, including #confused, #newbaby, #newdad, #firsttimeparents and #howhardcanitbe.

He also posted a shot of himself holding his tiny new daughter next to an overwhelming pile of presents.

The image was captioned: “Someone’s spoilt!

“Wow – totally overwhelmed by all of the gorgeous baby gifts that @_mrsdiy and I have been receiving.

“Thank you to each and every one of you for spoiling Nelly – she really has no idea how lucky she is right now!”

He documented Nelly’s first professional photo shoot too, showing the baby resting on a pink wool rug as the photographer bent over her to take the shot.

“Can anyone spot my gorgeous little daughter Nelly having her first photoshoot at just 12 days old! ” he said.

Craig and Laura got married last year, after dating for two years. The couple have been documenting their dream home project together as Mr and Mrs DIY.