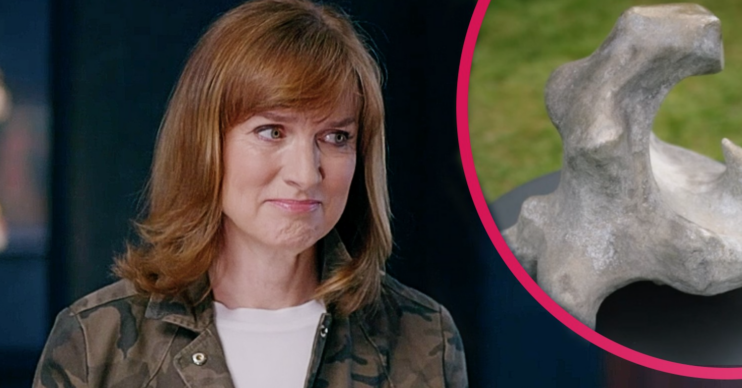 So close to £1million!

The couple’s small statue they were using as a doorstop was initially thought to be worth up to £1million.

It was thought that the sculpture could be a lost work from Henry Moore – one the most celebrated British artists of the 20th century.

What happened on Fake Or Fortune on BBC One?

In the new series, which started this week, Fiona and co-host Philip Mould went to meet couple Neil and Barbara in Norfolk.

They presented their ‘doorstop’, which sat in the middle of the garden and they called ‘Henry’.

Read more: Fiona Bruce children: How many kids does she have? Is she still married?

Sleek and smooth, and abstract in shape, it matched the style of Henry Moore, who died in 1986 aged 88.

It was then Philip dropped the bombshell.

“If we can prove that this is a one-off – not one of a series, but a unique object by a much loved, highly regarded sculptor of the 20th century – we could be talking in excess of half a million pounds,” he said.

As everyone gasped in shock, Philip dropped another.

“Who knows, could even be a million pounds.”

Where did Neil and Barbara find the statue?

Fiona exclaimed: “Up to a million?”

“That’s extraordinary!” Barbara added, and explained they had been using it as a doorstop.

Fiona and Philip went away to build a dossier of evidence to present to the Henry Moore Foundation.

And, as they delved deeper into the provenance of ‘Henry’ they unearthed links to another sculptor – Betty Jewson.

‘Henry’ was found at Mergate Hall in Norfolk – the former home of Betty – when he was trimming a hedge for a neighbour.

When Neil and Babara inherited the object from the neighbour, they christened it Henry because it looked like a Henry Moore sculpture.

What was the verdict on Fake Or Fortune on BBC One?

Fiona and Philip dug deeper and even got the material analysed.

Sadly it did not match the kind of material Henry Moore used in his sculptures and the Henry Moore Foundation panel decided it was not an original.

“I’m gutted for you, I really am,” Fiona said after delivering the news.

“[Henry] will go back to being a doorstop again. He will always be Henry,” Barbara said.