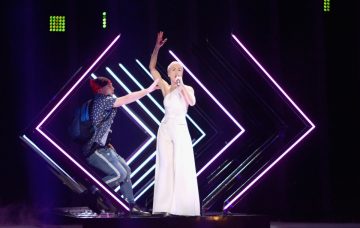 Was Eurovision invader same man who crashed The Voice?

Eurovision fans were left shell-shocked last night after an intruder crashed the stage while the UK’s entry, SuRie, was performing.

Now it’s been alleged that the man responsible could also have done the same thing at two other recent TV events.

While the identity of the Eurovision culprit has yet to be confirmed, it’s thought that he’s the man who charged onto the stage at last year’s live final of The Voice, and also at this year’s National Television Awards.

According to Sky News, he’s thought to be an anti-media campaigner who goes by the name Dr. ACactivism.

SuRie, 29, was halfway through her track, Storm, when a mysterious figure appeared from her right.

While the singer was thankfully not injured during the incident, she did have her microphone snatched before the man was led away.

He managed to shout out what sounded like, “Nazis of the UK media, we demand freedom.”

It meant she missed part of her song while a new mic was prepared for her, and she ended up finishing in 24th place, with a total of 48 points.

Some news outlets are claiming that the unwanted guest – who’s now said to be in police custody – was the same person who gatecrashed the stage during last year’s final of The Voice.

The Voice contestant Jamie Miller was performing when he was suddenly approached by a man in a blue cap. As presenter Emma Willis looked on aghast, the assailant was led away by security guards.

And at the National Television Awards in January, Dermot O’Leary found himself having to fend off a stage invader as he waited to present a gong with Bruce Forsyth’s widow Wilnelia.

That moment didn’t make television, however.

As for SuRie, she seemed to take last night’s drama in her stride. She later tweeted: “Well, I’ve always said anything can happen at Eurovision…”

A statement on behalf of Eurovision’s organisers said: “The EBU regrets a stage invasion took place during the UK performance at the Eurovision Song Contest Grand Final in Lisbon this evening. The person responsible is currently in police custody.

What did you make of last night’s incident? Leave us a comment on our Facebook page @EntertainmentDailyFix and let us know what you think!