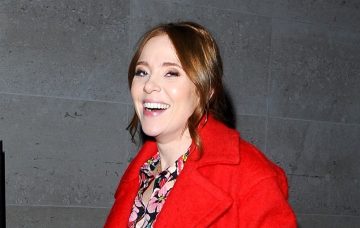 TV host Angela Scanlon has admitted she was left in shock following the quick birth of her baby daughter Ruby.

Angela, who presented The One Show during Alex Jones’ maternity leave, welcomed her first child in February and has confessed she wasn’t prepared for her arrival.

Speaking to Giovanna Fletcher for her Happy Mum, Happy Baby podcast, Angela explained how she went into labour while at home, eating a curry and watching the 2003 romcom Just Married.

But despite being in pain, Angela felt she was “probably being a bit dramatic” and was convinced she wouldn’t give birth for another few days.

Angela admitted: “I had all these plans, I had a little striped bikini with me [for the birthing bath] – as if I was going to wear that.

“I got into the bath and three-and-a-half hours later she was born.

“Honestly, I was completely shellshocked. You see these beautiful pictures of people weeping with complete joy…

“I mean, I arrived in the hospital without a change of clothes, without clothes to go home in.

“We had one babygro for Ruby… we didn’t have nappies. In my mind this just wasn’t happening just yet.”

She added: “After [Ruby] came out, they handed her to me and she looked up with her giant big eyes and I thought, ‘Oh my God, how do I have a baby? I was eating an Indian curry six hours ago’.

“I was kind of completely emotionless. It was really weird. I was shellshocked, it’s the only way I can describe it.

“In my mind, from the time I’d been eating my takeaway to the time I was in the bath, I was like, ‘This is not me in labour’.”

Angela’s husband Roy was at her side during their daughter’s birth but, despite him being full of emotion, she said she just felt “numb”.

“Roy said stoic, I was quite numb actually. It lasted for 36 hours maybe. He was quite emotional and I was terrified actually,” Angela explained.

Six weeks on, Angela admitted she is feeling “surprised at herself” for how well she is adjusting to being a new mum.

And the love she has for her daughter is clear.

Filling up with tears of happiness, Angela told Giovanna: “Ruby smiled for the first time yesterday.

“I’m happy when she’s happy and she has her little drunk milk head.

“I look at her and think, ‘Dude, I didn’t even know you six weeks ago. I just hope I can always make you happy.'”