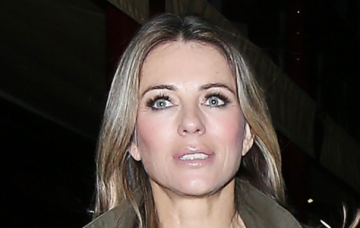 The 21-year-old was attacked in London

The Hurley family was thrown into turmoil the week before last when 21-year-old Miles, the nephew of Elizabeth, was rushed to hospital in South London.

He, alongside another 21-year-old friend, had been attacked in the street and repeatedly stabbed.

As soon as the news broke, Liz hopped on a flight to London from  New York, where she had been staying.

And a week ago she took to Instagram to detail exactly what had happened, writing: “My 21 year old nephew @mileshurley1 was brutally attacked by four men in London on Thursday night.

“He was repeatedly stabbed and lost more than four pints of blood. A policeman was patrolling close by and administered first aid until the ambulance arrived.

“The deepest wound just missed severing his spine. By some miracle no vital organs were damaged. We are praying that these animals are caught before they maim, or even kill, someone else. These are sad days.”

And a week later, Liz has taken to Instagram again to appraise fans of Miles’ condition – and luckily it sounds like he’s on the mend.

Read more: Boyband star rumoured to be lined up for the next series of Strictly Come Dancing

Alongside a photo of her posing with a dove – a symbol of peace – Liz wrote: “Wishing everyone a peaceful weekend. Thank you to all who sent such kind messages following the news that my nephew @mileshurley1 was viciously stabbed last week.

“His wound is shocking, he remains in great pain and can hardly move, but he is slowly recovering.”

Liz then went on to praise her sister for looking after both Miles and his friend, who was also involved in the incident.

As for Miles, he also used his Instagram account yesterday to let everyone know he was alright. He posted a picture from his modelling career, and a caption thanking everyone for their support.

He wrote: “Thank you to everyone for sending kind messages to me. I’m still struggling to walk but am slowly recovering. Thank you to my family for being the best.”

In the second image in the upload, he included a very graphic image of his stab wound – which is not for the faint of heart.

Liz had posted her update from India, but promised she would be kept abreast of any developments, and pledged to help make the streets safer.

It seems as if Miles is on the road to recovery!