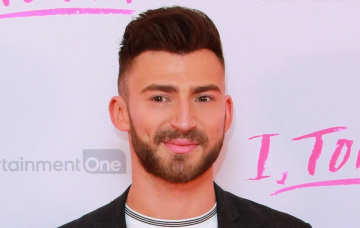 Having appeared on The X Factor, I’m A Celebrity and Dancing On Ice, Jake Quickenden is a bona fide reality star.

But that could all be about to change.

The Scunthorpe-born star, 29, has admitted that he’s concerned about being typecast in that area of entertainment, and is setting his sights on an exciting new challenge.

Jake first appeared on our TV screens in 2012’s series of X Factor, in which he was eliminated at the Judges’ Houses stage.

Undeterred, he appeared on the show again in 2014, and this time made it to the live finals, before being voted out in week three.

That same year, he finished runner-up in I’m A Celebrity, before winning this year’s Dancing On Ice with his professional partner Vanessa Bauer.

But in an interview with Express.co.uk, he hinted that he’s ready to move on from reality TV and explore some different options.

He admitted: “I want people to know me for maybe being a presenter or something, being in a musical, rather than ‘Jake who’s done 75 reality shows.'”

Jake said he will continue to take acting lessons and added: “I’m willing to start new and work my way up in presenting. I love it.

Jake is also touring with stripping troupe The Dreamboys this year, and he admitted that he’s having the time of his life.

Learning to dance could be a smart move for Jake as although he’s keen to move away from reality TV, one show he would like to have a go at is Strictly.

He confessed: “I would definitely be up for it if the opportunity ever came along, but I think it would be a couple of years now.”

Reality TV may not have seen the last of Jake yet!

Meanwhile, Jake recently spoke out to address claims he and fiancée Danielle Fogarty have called off their wedding.

Jake told ITV’s Lorraine nothing bad had happened between him and Danielle, they were just taking some time to themselves and seeing what happened.

He explained: “We’re having a bit of time apart, kind of dealing with ourselves, and work, and being busy.

“For me it’s just about taking some time out and seeing what happens really. But like I said, there’s not a bad word. I was with her on Monday, we still talk and I still love her to bits, but sometimes you’ve got to go away to come back.”

What do you think about Jake’s career plans? Leave us a comment on our Facebook page @EntertainmentDailyFix and let us know!