Peter Andre finds himself wrapped up in Twitter banter between KFC and Iceland!

Making the (chicken) breast of a bad situation!

As if it hasn’t been hilarious enough hearing about the public losing their minds over a lack of chicken, you know, calling 999 because their local KFC was shut etc.

Now it seems even the celeb world are getting involved with the cluck up by KFC.

Peter Andre found himself inadvertently involved when KFC and frozen food chain Iceland mentioned him in a rather funny exchange by the two brands.

It all started when Iceland made the most of the national chicken shortage and tweeted a picture of their chicken meal deal.

“Oi @KFC_UKI, we can deliver this in time for tomorrow?” quipped the store’s official Twitter. 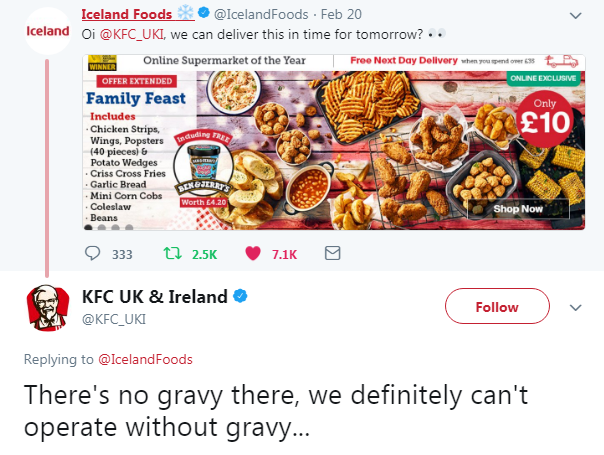 KFC were very amusing in their reply and said: “There’s no gravy there, we definitely can’t operate without gravy…”

Never a truer word said for any gravy lovers out there.

Hitting straight back with a Twitter poll, Iceland replied: “Hmm, we think we should let the people decide…  What’s more important from a fried chicken place?”

Chicken was the clear winner with 69% of the vote. 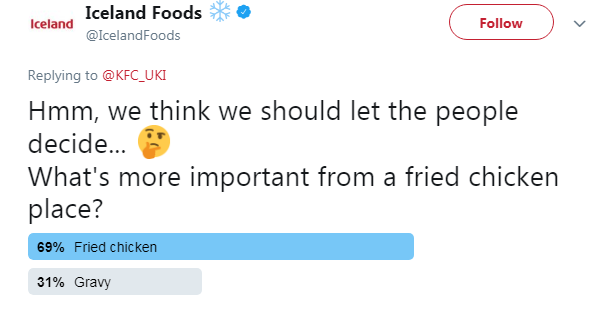 KFC responded with a cheeky answer that simply said: “Fair point. Can we borrow Peter Andre from you for our grand re-opening?”

Peter, as you may remember, was one of Iceland’s celebrity ambassadors, appearing in adverts for the company.

Iceland came back with a genius version of Peter’s famous song Mysterious Girl, changing the words with plenty of chicken puns intended! 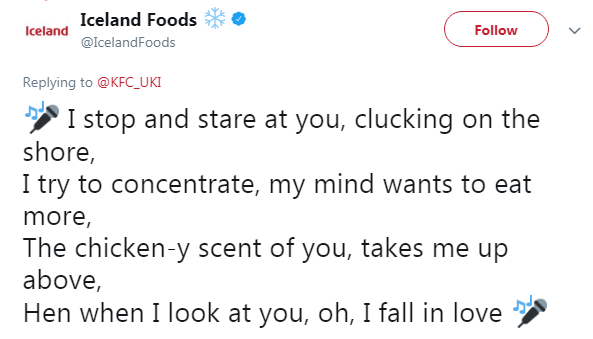 It was literally, INSANIA!

Especially when Peter himself got involved on Instagram, posting a picture of the banter between the two shops.

He said: “Hey don’t drag me into this. I’m still upset you ran out of chicken. Maybe you should have frozen some for a rainy day 😂@kfc_uki @icelandfoods #poweroffrozen”. 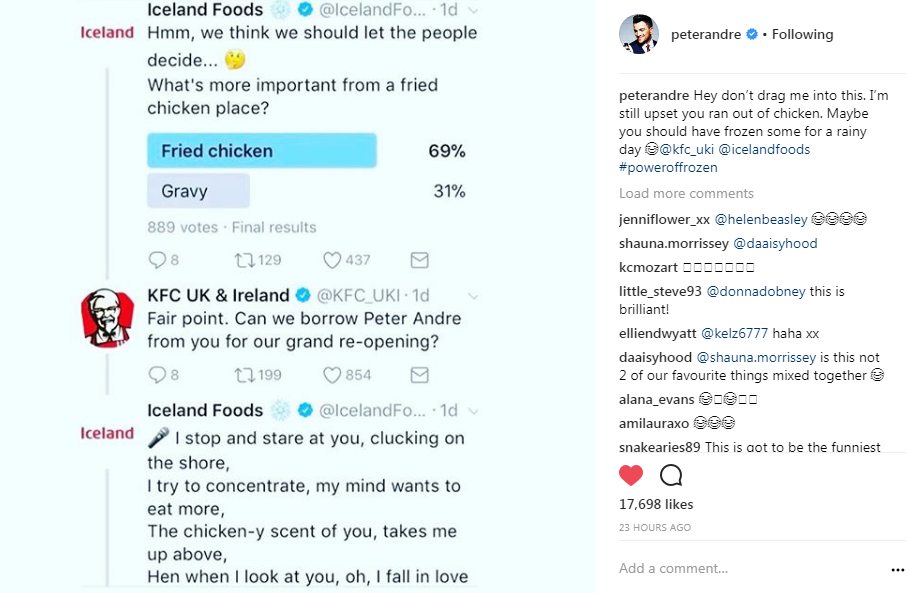 Quoting the store’s own strapline, and scoring brownie points with the shop itself…

And other celebs also found themselves adding to the KFC palaver as they gave the franchise a round of applause for their cheeky apology.

It featured in some of the country’s newspapers and celebs including Phillip Schofield and chef James Martin thought it was brilliant for it’s cheeky slogan. Let’s just hope there’s no more clucking about, and the UK can live in chicken harmony once more!

Have you been affected by the chicken shortage? Leave us a comment on our Facebook page @EntertainmentDailyFix and let us know what you think!