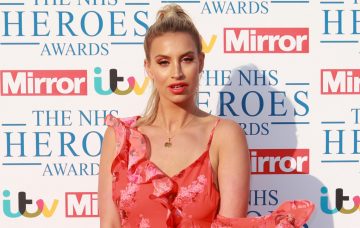 She's not still dating him!

After Ferne was spotting taking her daughter, Sunday, to visit Arthur in prison some fans began to wonder if they had reconciled,  but Ferne insists that is not the case.

Speaking to OK! Magazine, she claimed that the visits were solely the result of the pair’s shared parenthood.

“Of course we’re not still together,” she said. “He’s the father of my child, and that’s the end of it.”

Arthur was arrested in April 2017, and charged with an acid attack in a London night club.

In November he was found guilty of grievous bodily harm and sentenced to 20 years in prison.

Shortly after his arrest, Ferne announced she was pregnant with his child. She gave birth to a daughter on the 2nd of November.

Arthur asserted his parental rights to see Sunday, but Ferne consulted with lawyers and a child psychologist before agreeing.

She now makes the trip to see him with Sunday once a month.

“One day, she’ll be old enough to decide what she wants to do for herself, but until then I have to do what I think is best based on the guidance I’ve been given,” she said.

After the trauma of the last year, Ferne also said she’s beginning to think about dating again.

“I certainly don’t need a man to make me happy, but I’m at the stage where I’m open to meeting someone,” she said.

“It would be nice to have someone to flirt with and go on some fun dates with.”

Do you think Ferne is ready for a new romance? Let us know on our Facebook page @EntertainmentDailyFix!