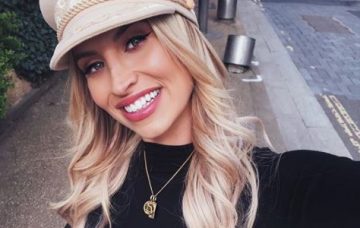 Ferne McCann looks to have moved on from her acid attacker ex Arthur Collins after being pictured partying with Love Island’s Charlie Brake.

The former TOWIE cast member kept the 23-year-old food wholesale heir close during their night out, clutching his hand as they hit a variety of nightclubs in London.

Mum of one Ferne, 28, also stuck to Charlie like glue as they ended their evening with a taxi ride together.

Earlier they had been seen chatting with friends outside in the street as he smoked a fag.

But despite being snapped together as they moved between Sketch in Mayfair and The Box nightclub in Soho, the pair seemed less keen to be in the frame as they rode away in the cab.

Charlie was pictured obscuring his face with his phone while an apparently amused Ferne threw her head in her lap as photographers took photos.

The tactile Essex reality star was dressed to the nines for her night on the tiles with Charlie, wearing a figure-hugging white mini dress she looked to have to pull down to prevent it riding up.

Her off the shoulder outfit and enormous matching heels were complemented with a huge grin which looked as if it barely left her face all night.

Autumn essentials 🍂 @benedictravenuk Use CHARLIE15 for an exclusive 15% discount until the end of October. #ad

Charlie, meanwhile, was togged out in a black shirt, trousers and black and white trainers.

The affectionate display is believed to be the first time she has been seen out with a possible love interest since splitting with Collins, the father of her 11 month daughter Sunday.

He is currently serving a 20 year prison sentence for his involvement in a brutal attack in a east London club.

Privileged Charlie split from his Love Island reality partner Ellie Brown in September, just days after they enjoyed a trip to Switzerland.

Representatives for both Ferne and Charlie have been contacted by ED! for comment.