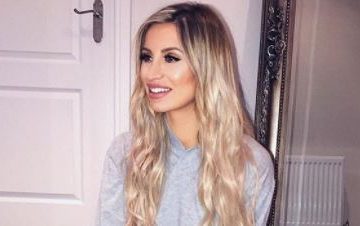 The I’m A Celebrity star took to Twitter to deny allegations she’s been secretly seeing Arthur, who is behind bars for carrying out an acid attack last year.

Ferne spoke out amid swirling rumours her friendship with Sam had become strained because of her continued contact with Arthur.

She said: “Regarding today’s many FALSE stories about me (and sorry to bore you all)… For the record (again) I am not in a relationship with Arthur. I do not know how much clearer I could be about that!!

“Sam and I never fell out about Arthur! This is false.”

Ferne continued to say that she can’t fully cut Arthur out of her life as she shares daughter Sunday, three months, with him.

“Arthur is Sunday’s father,” she explained. “I have had to communicate with him and his family with respect to Sunday (mainly through lawyers).

Ferne ended her relationship with Arthur last year, while pregnant with Sunday. He was accused of throwing acid at a London nightclub on April 17, injuring 22 people.

He was found guilty in December and sentenced to 20 years behind bars, with five years on licence.

In January, he was given a further eight months in jail after being accused of using a smuggled mobile phone behind bars.

Meanwhile, the stories about Ferne and Sam allegedly falling out began to swirl after Sam’s publicist apparently shut down questions about Ferne during a recent interview with New! magazine.

Read more: Mel B claims Spice Girls have been invited to the royal wedding!

But what does that really prove?

Many celebrities like to keep the focus of interviews on what they are promoting, rather than go off on any tangent about other things.