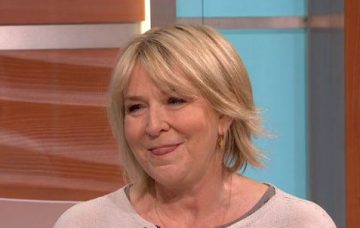 Fern Britton has said the pain from her terrifying battle with sepsis two years ago has only just started to ease.

The television favourite, 60, was rushed to hospital and operated on after contracting a life-threatening infection following a hysterectomy in July 2016.

Appearing on Good Morning Britain on Thursday, she said: “I am doing very well, in the last month I’ve felt a lot better.

“They say the resulting pain can last for up to two years but mine actually began to ease around four weeks ago and I’m feeling better.

“I’m not quite as fit as I was but I’m getting better.”

Read more: This Morning viewers have one MAJOR question about Holly and Phil after the BRITs

Fern recalled how she’d gone in for a hysterectomy two years ago and been told to expect some discomfort, but she soon realised the pain she was in wasn’t normal.

“The hysterectomy was all fine. It was, ‘Okay, you won’t be good for six to eight weeks and then you’ll be fine’ but within the first three to four days I started to feel so unwell.

“I had so much pain everywhere, going into every joint and nerve ending, being sick and hot and sweaty and confused. I was in bed thinking, ‘I’m going to die, I know I am dying.’

“That is a very important symptom of sepsis. Everybody who gets that ill has in their mind, ‘I am going to die.’ So if you’re at home thinking I’ve got all this pain and you’ve just had some insult to your body where a bug could get in, it could be sepsis and you must ring the doctor.”

Fern said her sepsis “took a while” to diagnose but she praised the ambulance service and NHS for their care.

“The ambulance were brilliant. It was straight to hospital, into resus, straight onto antibiotics. They took a blood test to find out which germ it was and mine was e-coli.

“I spent another ten days in hospital and they had to operate on me again to remove all the abscesses through the stomach cavity. And I nearly died.”

Fern first spoke about her sepsis battle to Prima magazine last summer, where she bluntly recalled her fear of dying on the operating table.

She revealed how she took her wedding ring off to give to her daughter before surgery, as she “hated the thought of them taking it from my dead body to give to her.”

After surgery, she then developed pneumonia and her lung collapsed, but finally she began to recover and was able to return home.

She said: “I am slowly rebuilding my health and regaining my fitness. Fortunately, when the sepsis struck, I was probably the fittest I’d ever been thanks to a serious cycling habit – I’m sure that saved me.”

Fern also said the terrifying experience really showed how close her family is, saying of husband, TV chef Phil Vickery: “We know it was a lucky escape and, although we were so close before, it has brought us even closer.”

She’s now just written her SEVENTH novel, Coming Home, and will appear in the upcoming Calendar Girls tour of the UK.

Will you read Fern’s new novel? Leave us a comment on our Facebook page @EntertainmentDailyFix and let us know what you think!