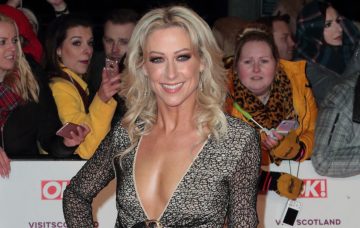 She claims she got too thin while on the TV show

Singer Faye Tozer claims she lost a huge amount of weight while competing on Strictly Come Dancing, saying training for the show show left her “emaciated”.

Speaking to Mirror Online, the Steps star said she put on a “few pounds” after the show finished and she now feels like she’s in the best shape of her life.

However, it seems she feels she was too thin just after the TV series ended.

When ask if she was embracing her new dancer’s body, she replied: “Honestly, I need to book a holiday now, so I can take pictures in a bikini while I still look like this.”

But she also went on to say that it took her a few weeks after the show ended to get back to a figure she was happy with – and suggested she felt underweight.

“Although before Christmas I was a bit emaciated,” she said. “I was just over 9 stone, which isn’t a healthy weight for me.”

She claimed that the weight loss left her looking haggard, but that after putting on a few pounds she was looking and feeling a lot better.

Faye also claimed she was enjoying having something else to be known for.

“I’ve finally been given a new surname,” she said. “I was always ‘Faye from Steps,’ now it’s Faye from Strictly.’ I’m grateful.”

Faye, and her pro partner Giovanni Pernice were runners up on last year’s season of the dancing show, alongside Ashley Roberts and her partner Pasha Kovalev, and Joe Sugg with his partner Dianne Buswell.

Journalist Stacey Dooley walked away with the glitter ball trophy, along with her pro partner Kevin Clifton.

Faye is currently on performing in the Strictly Live tour.

What do you think of Faye’s Strictly figure? Leave us a comment on our Facebook page @EntertainmentDailyFix and let us know what you think.