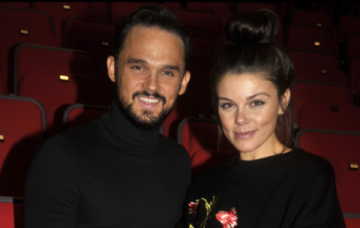 We could be hearing wedding bells soon!

She’s been with Pop Idol star Gareth Gates for five years, and Faye Brookes has admitted it won’t be long until they tie the knot and start a family.

The Coronation Street actress told The Sun’s Fabulous magazine that marriage and kids are definitely on the cards – but she thinks Gareth, 33, is waiting for the right time to pop the question.

She said of them getting married: “I talk about it all the time but Gareth loves to surprise me. He goes big or goes home.”

She added: “I want children, I’m naturally a carer.”

For now, the 30-year-old enjoys spending time with Gareth’s daughter Missy, eight, who he had with his ex-wife, Suzanne Mole.

She said of their relationship: “I couldn’t have asked for a more amazing gift than to take Missy under my wing. I adore her. Obviously I’m not her mum, but she’s grown up with me by Gareth’s side helping her along the way.”

Faye, who plays Kate Connor in Corrie, is convinced Missy will follow in the footsteps of her singing dad and dancing mum by becoming a performer.

Read more: Kylie Minogue shares her ‘sadness’ about not having children

She’s already taken to the stage to play Princess Jasmine – which coincidentally is the first role Faye ever played.

Faye and Gareth first met when they were starring in the musical Legally Blonde and they became good friends.

After Gareth split from then-partner Suzanne, his friendship with Faye blossomed into romance when they were both cast in the same panto.

And he previously told OK! magazine it was far from love at first sight!

“I was quite scared of Faye, actually! She was this amazing leading lady so she was quite intimidating,” he said of how he felt before he got to know her.

Faye said she was also surprised they hit it off, as she didn’t have a crush on him back in 2001 when he was in Pop Idol, unlike some of her friends.

She said: “When Pop Idol was on I was 15 and my best friend in high school had a huge poster of Gareth on her bedroom wall. Whenever I stayed at her house and I slept in that bed I’d be like, ‘I don’t get it!’ I was so ‘whatever’ about him.”

Who would have known all these years later she’s now planning to marry him!

Do you think Faye and Gareth make a cute couple? Leave us a comment on our Facebook page @EntertainmentDailyFix and let us know what you think!