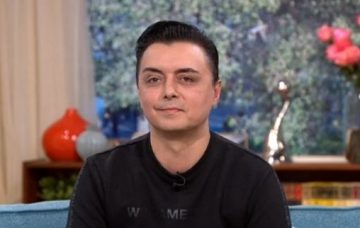 The golden buzzer act had branded it a "mockery of entertainment"

The magician who melted Britain’s Got Talent viewers’ hearts on Saturday night has been caught dissing the series in a Twitter rant.

Marc Spelmann, who received Ant and Dec’s coveted golden buzzer, branded the show a “mockery of entertainment” and “a joke”.

He called viewers “deluded” and urged them not to vote. The tweets, posted in 2012 and 2013, years before he auditioned and became an overnight star, have now been deleted.

In a statement to The Sun newspaper, Marc, 46, apologised, saying they were “careless comments made from my sofa”, and insisted he was a big fan of BGT.

Marc wowed the audience and judges Simon Cowell, David Walliams, Amanda Holden and Alesha Dixon in the series opener with a mind-reading trick.

He had them in tears by revealing his wife’s breast cancer battle while she was pregnant and their “miracle” IVF baby, born after the couple’s 10-year struggle to conceive.

But, launching into a tirade against the show in the old scathing tweets, Marc had said: “This is the last I’ll say I promise. #bgt is a mockery of entertainment.

“It’s a joke. Simon is laughing at the deluded public. Do not vote!”

Referring to an infamous incident in the live final five years ago when a viola player hurled eggs in protest from the stage at Simon Cowell, Marc wrote: “Musician chucking eggs at Simon. Wonder if it was truly random or a publicity stunt to detract from poor final?”

Marc now says he regrets the comments, saying in a statement: “I have changed rather a lot in the last six years and the offhand tweets I made about Britain’s Got Talent many years ago in no way reflect my thoughts and feelings on the show now.

“I am a huge fan of the series and it has been a dream of mine to perform for the judges since before my daughter was born.

“The tweets were careless comments made from my sofa, which I have since deleted as I would not want to give the impression I feel that way.

“The outpouring of support I have received from the public since getting the golden buzzer has been overwhelming and I can’t thank Britain’s Got Talent and the public enough. I am very proud to be part of the show.”

Marc’s golden buzzer from hosts Anthony McPartlin and Declan Donnelly put him straight through to the live semi-finals next month.

He appeared on ITV’s This Morning earlier this week, dazzling Phillip Schofield and Holly Willoughby with another mind-reading trick involving his two-year-old daughter Isabella who correctly guessed what they were thinking.

His wife, Tessa, underwent chemotherapy and has now been given the all-clear from cancer.

What do you think of Marc’s old tweets? Leave us a comment on our Facebook page @EntertainmentDailyFix and let us know what you think!