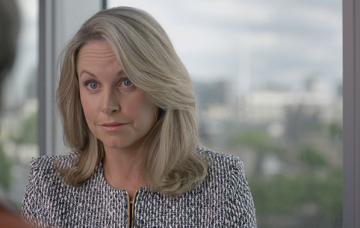 Did you spot the star?

The show has twists and turns at every corner, with Carey Mulligan playing Detective Inspector Kip Glaspie, who is trying to get to the bottom of the murder of a pizza delivery driver.

But those watching carefully saw a character called Suki Vincent, a journalist who is romantically involved with John Simm’s character, MP David Mars, appear, albeit briefly, in episode one.

But it was long enough for EastEnders fans to recognise that Suki was played by actress Kim Medcalf, better known as Sam Mitchell version two!

Kim was last seen on screen as Peggy Mitchell’s daughter in 2005; after that Daniella Westbrook resumed her role after some time away from the programme.

Since she left the soap, Kim has been keeping herself busy starring in musicals such as Crazy for You, South Pacific and Cabaret, and TV shows Missing, Death Becomes Him and The Fixer.

Did you watch Collateral last night? Let us know what you thought and leave us a comment on our Facebook page @EntertainmentDailyFix