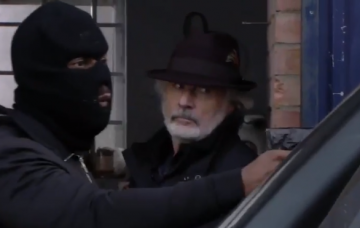 Has Mick been shot? Who was the shooter he recognised? Why was the robbery carried out in broad daylight in front of numerous witnesses?

One of the most pressing questions many fans had was why wasn’t Aidan, the mastermind behind the plan, wearing a mask to disguise himself like the others?

They all wore balaclavas after refusing to wear comical masks of political leaders but Aidan’s face remained exposed throughout the botched heist outside The Archers.

Now some fans think they know why.

They’ve speculated that it’s all another part of Max Branning’s revenge plan and he cooked it up with Aidan during his time in prison.

One wrote: “Max prob met Aiden in prison & between them to get revenge on Phil & prob Mick as he was Ian’s mate they set up robbery to steal a safe from Wilmot Brown’s house. Prob all the men in van are in on it hence no mask for Aiden????”

Another agreed tweeting: “Aidan is in on it and has set Mick, Keanu, Vincent and Phil up! He was in prison with Luke and Max has mastermind it all…..that’s my theory!”

Others agreed that Aidan had definitely set-up the hapless Albert Square residents and if it wasn’t for revenge, it was so he could “get his hands on ALL the loot.” 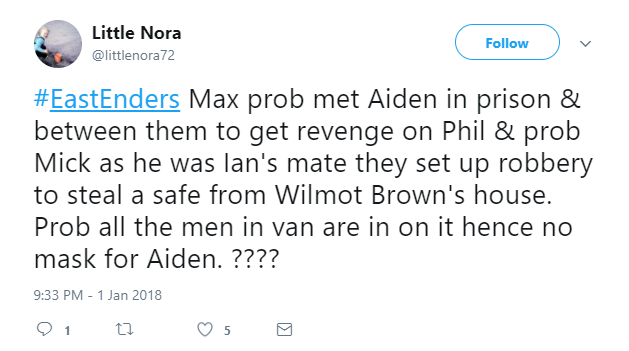 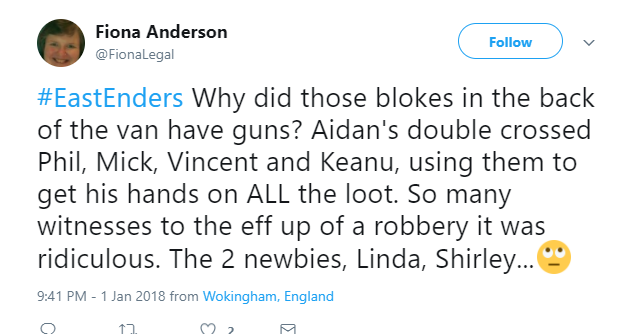 Meanwhile, others believe they’ve guessed who the “she” the van drivers kept referring to as their boss is.

Some fans think it must be Mel Owen, played by Tamzin Outhwaite, who it is well-known is returning to the show this year.

Could the stolen goods belong to her?

In another twist, some fans speculated last night that the shooter in the back of the van was Mick and Linda Carter’s son Lee, recast as a new actor.

But eagle-eyed viewers spotted that the character had been named in the credits as Callum “Halfway” Highway, and it’s more likely he’s an old Army friend of their son’s.

They speculated over whether he had been involved with the robbery of The Vic earlier this year, and even if Lee could somehow be part of the heist set-up. 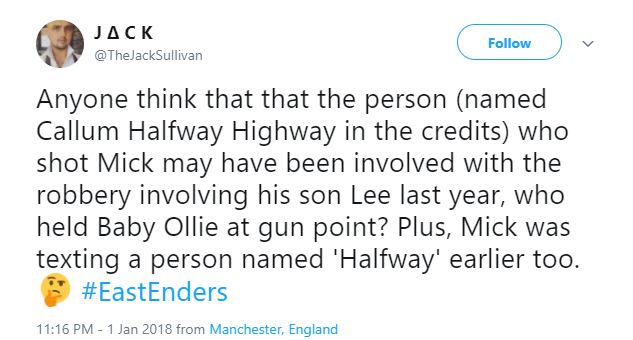 Whatever the answers, the episode has certainly got people talking and shows EastEnders looks set to be much more interesting in 2018!

Tune in this evening to find out the aftermath of the heist.