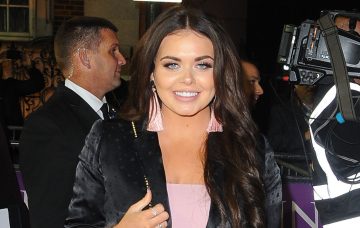 What a good looking couple!

Scarlett Moffatt has raised eyebrows by sharing a cute picture of herself with rumoured new man Lee Wilkinson.

The Gogglebox star-turned-presenter, 27, has been single since splitting from hairdresser boyfriend Luke Crodden last year.

But over the last couple of weeks, rumours surfaced that she’s been quietly dating fitness model Lee, an old friend from back home.

Neither Scarlett nor Lee has confirmed that’s true, but fans reckon Scarlett’s cosy pic of them on a “date night” speaks for itself!

Last night Scarlett took to Instagram to post a picture of the duo, which she captioned:  “Love this one… love a date night in Newcastle #datenight”.

Scarlett’s fans were delighted, flooding her comments with well-wishes.

One wrote: “You look amazing and sooo happy”, while another said: “Where did you find this fine specimen of a hunk?! Lovely to see you happy!”

Fellow Geordie and celebrity Vicky Pattison also offered her thoughts, writing: “This” followed by a string of heart-eye emojis.

Scarlett and Lee have reportedly known each other for a decade, and The Sun has claimed they’ve been dating since Christmastime.

Lee has performed with male stripping group Dreamboys in the past and, in fact, was pictured with Scarlett a few months ago after a performance.

Lee hails from County Durham, the same as Scarlett, and she’s reportedly fancied him for ages, with the duo reconnecting over the festive period.

A source told The Sun: “She has always liked Lee but after making it in television and moving to London, Scarlett never expected to get together with him.

“But after going back up north over the festive period they connected and have been in constant contact ever since.”

ED! has reached out to Scarlett’s representative to find out whether she and Lee are officially in a relationship.

But all signs are pointing to yes – so it’s happy days for Lee and Scarlett!

Do you think Scarlett and Lee make a cute couple? Leave us a comment on our Facebook page @EntertainmentDailyFix and let us know!