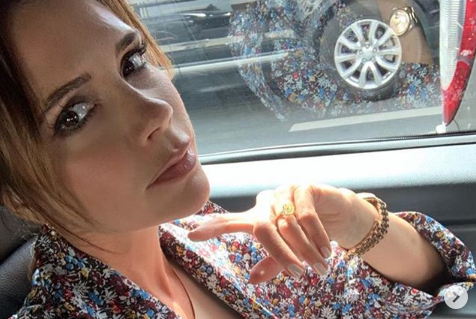 The photo included her mum and sis

Victoria Beckham delighted her social media fans earlier today (May 12) after posting a charming photo from her childhood.

The 45-year-old former Spice Girl shared a snap with her 25 million Instagram followers to pay tribute to her mum and mother-in-law because it is Mother’s Day today in the US.

“Happy Mother’s Day to all the mums celebrating today. @jackie.adams_ @sandra_beckham49 thank u for all that u do xx Kisses from us all,” she wrote in the adorable image’s caption.

Showing Victoria as a child resting her head up against mum Jackie as she stands alongside younger sister Louise, followers were knocked for six by the throwback family photo.

But while many commenters took it upon themselves to tell Victoria her mum is British and doesn’t ‘qualify’ for Mother’s Day wishes on the US version of the date, several others were blown away by the resemblance between Posh and second son Romeo, 16.

“Double of Romeo,” agreed another.

Earlier this month, the fashion designer gave fans another glimpse of her family life as hubby David marked his 44th birthday.

And an Insta pic of the couple and their kids enjoying a celebration dinner together reinforced how close they all are.

It was only a few months ago that Victoria dismissed speculation about the strength of their 20-year marriage, telling Vogue: “We both realise that we are stronger together than we are as individuals.”

Last week, David was banned from driving for six months, given six points on his licence and fined £750 for using his phone behind the wheel.