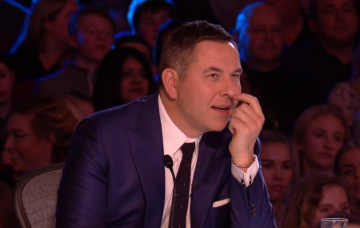 Why is David's seat different from the rest of the BGT panel?

David Walliams has explained why he is treated differently to the other judges on the Britain’s Got Talent panel.

Eagle-eyed BGT fans noticed the 46-year-old comedian’s seating arrangement is not like those for Simon Cowell, Alesha Dixon and Amanda Holden during last night’s episode, and tweeted him to find out the reasons behind the alternative support for his behind.

And it turns out David does indeed have a special chair to perch on during filming – but not because he wants to stand out.

He told his two million followers on Twitter last night his chair is designed to help those those who suffer from back pain.

“It is because I had a back operation to remove a disc after my Thames swim,” the Sport Relief star explained.

For those of you who want to know why I have different chair to the other judges on @BGT it is because I had a back operation to remove a disc after my Thames swim for @sportrelief and so need to sit on chairs that are specially designed for people with back problems.

While his fellow judges all sit in black, high-backed seats with silver arms, David has a grey chair with a back of a different shape.

One frustrated viewer was particularly distracted by the lack of balance in the chairs on display.

It annoys me that David has a different chair to the other three judges! #BritainsGotTalent #BGT

But others replying to David on Twitter couldn’t see what the fuss was all about – with many saying David’s chair was none of their business, anyway.

Why are you explaining? No bodies business. Any loved the show tonight . And the wee peck you gave @SimonCowell when he pressed the golden buzzer for the Father & Son act . #BGT

People are actually asking this question????

I have never paid attention to what chairs any of the judges sit on, let alone notice that yours is different. Tell who ever it was that pointed it out to get a hobby.

I hadn’t noticed. Like I would waste my time looking at a chair when your face is right there?
I’m glad you’re OK though, something my mother impressed upon me is the importance of looking after your back.

David swam the English Channel for Sport Relief in 2006, as well as the Strait of Gibraltar in 2008.

In 2011 the Little Britain star swam the entire 140-mile length of the Thames, raising more than £2million for the charity.

He underwent emergency surgery two years later to alleviate pain from an intervertebral disc injury he sustained during the mammoth effort.

Did you notice David sits in a different chair to the other judges on BGT? Let us know what you think by leaving us a comment on our Facebook page @EntertainmentDailyFix!