Anybody who got a tattoo at a young age would probably have worried about their mother’s reaction.

And we bet 18-year-old Brooklyn Beckham was no different when he got a new inking, with pride of place on his bicep!

Brooklyn’s already got a fair few pieces of ink, much like his tattoo-mad Dad David.

But this one had a special meaning, as it was dedicated to Mum Victoria – featuring a heart with “MUM” written through the middle.

So if you’re going to get a new piece of body art, dedicating it to your mother’s probably a pretty smart way of making sure she approves! 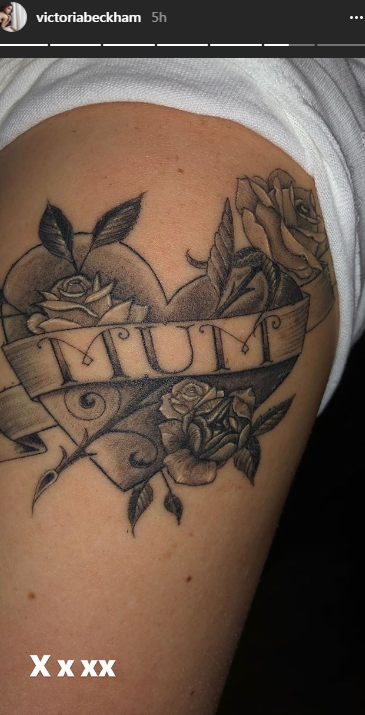 Victoria herself is clearly thrilled with the tribute, having featured it on her Instagram stories.

But when she posted a new picture telling the world exactly what she thought about the new tattoo, fans were quick to point out one hilarious detail in the photo.

But fans could only keep their eyes on one part of the picture, which wasn’t the tattoo itself.

Read more: Will Karen and Kevin Clifton both return to Strictly Come Dancing in 2018?

It was the fact Victoria’s index finger appeared to be about a foot long!

Fans were cracking up, with one writing: “For a second there I thought @victoriabeckham had a really loooong finger!”

Another said: “Love your family. A true inspiration, but I have to ask; how long index finger on your right hand?”

Of course, it was all an illusion – the tip of the digit in question belonged to Brooklyn all along.

But we have to admit, we did a double-take when we first spotted it as well!

Glad you like the tatt, Mrs B – and we’re also quite glad all your fingers truly are of a normal length.

Did you spot it? Leave us a comment on our Facebook page @EntertainmentDailyFix and let us know what you think!