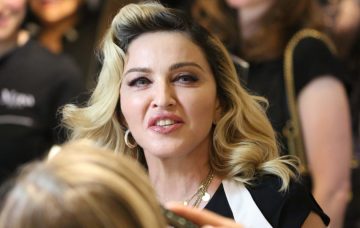 Fans speculate that Madonna has had ‘butt implants’

She has caused confusion with her new look

She is the queen of transformation and now Madonna’s fans think she may have made some changes in the derriere department!

The 60-year-old sparked talk that she might have had butt implants after her figure appeared a lot curvier while on stage recently.

Her behind looked much larger as she sang during a New Year’s gig with her son David at Stonewall Inn in New York.

She opted for tight, black jeans and a fitted leather jacket for the performance, showing off her figure.

The video and pictures of the singer, posted on celebrity PA Michele L.Ruiz’s Instagram, soon got tongues wagging.

One fan asked: “Are those ass implants?”

While another added: “She looks good for her age and better with the weight gain , but that butt !!! No Madonna please !”

The peach emojis also kept coming, with a third commenting: “Is she wearing filler on her butt? 🍑”.

What could be better than bringing in the New Year with The Queen and her beautifully talented son? Ummm…having a conversation with The Queen ( please, I hope someone recorded those MoMents 🙏🏻 ). Thank you, @madonna and the people who made this possible (I love you guys More than you know!!!) – you just made every shitty thing that happened in 2018 so Much better. 2019 is already looking up 🙏🏻👑 Special thanks to My hubby, who always supports My Madness!!! I love you to the Moon and back!!! ***If you repost My video, please make sure it is properly credited – Thank you!!!***

Read more: Sir Billy Connolly says he is “near the end”

However, some thought Madonna simply had a mic pack in her back pocket and it was giving the illusion of a larger bum.

One follower wrote: “That’s the microphone control in her butt.”

The star was all about the love on the night. She also shared a video from the gig, which celebrated the Pride movement.

Read more: Olivia Newton-John addresses rumours that she has weeks to live