Moira’s unexpected violence was a reaction to Cain admitting he still loved her, but instead of falling into his arms as he hoped, she slapped and punched him to the ground.

Cain had just destroyed evidence that Moira was responsible for killing Emma Barton, not her son Adam – who has gone on the run to escape jail time.

The Dingle bad-boy insisted he did it out of love, but Moira hit back saying he just wanted her around so he didn’t have to take responsibility for their baby, Isaac.

Moira then laid into him, punching him over and over again until Cain was bleeding.

Fans took to Twitter to talk about their shock and upset at the violent scenes, which were shown before the 9pm watershed.

“Just caught up on tonight’s @emmerdale I found the scene between Cain & Moira upsetting & feel anyone who has suffered Domestic Violence would feel the same. The fact you didn’t give any numbers for anyone who was affected by it was appalling,” raged one viewer.

Another agreed, adding: “It makes me so dissapointed when I see what’s happened to cain and moira, tonight’s scenes were brutal, bloody and out of character. Sure we’ve seen moira slap cain a few times but never like this, come on emmerdale bring back the coira we know and love.”

A third fan predicted a rather dark twist in the tale, saying: “I think the storyline will be that Moira has been battering Cain for a while.”

@emmerdale totally unacceptable to show Moira assaulting Cain in such a graphic way at 7.25pm! There is too much violence creeping in! Clean up your act!! #emmerdale #violence #watershed.” 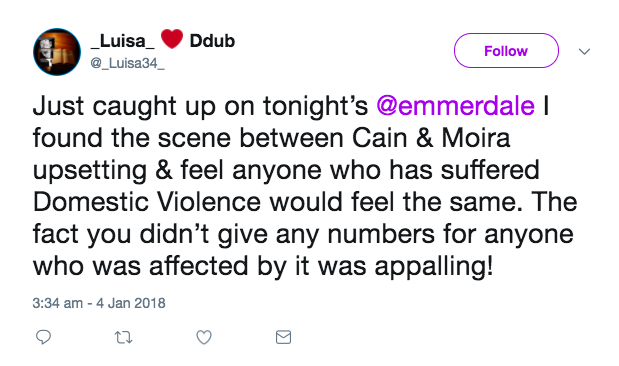 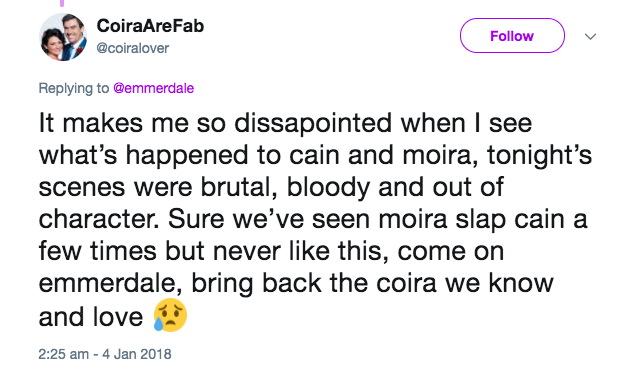 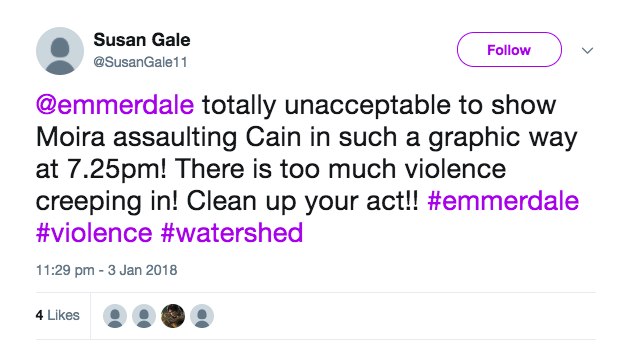 Not everyone thought the violence was gratuitous thought, with some Twitter users jumping in to defend Emmerdale’s decision to show them.

One wrote: “oh the groans about the @emmerdale ep tonight.. the scenes showed a lot the character of cain realised character of moira was lashing out she is grieving and guilt filled Fans there were warnings of violence from @ITV.” 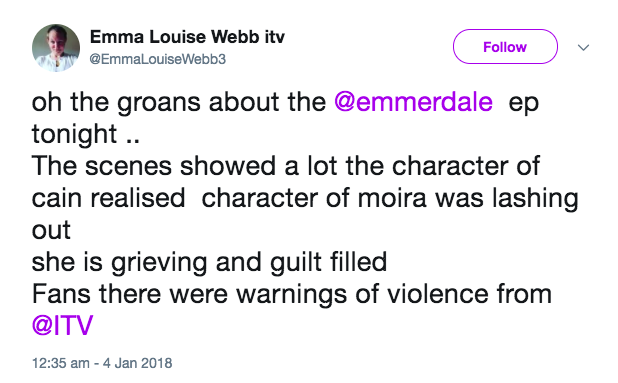 There’s no doubt Moira has been under an enormous amount of pressure recently, what with confessing to murder, watching her son take the blame for it and, of course, her lack of sleep.

Will her violent actions be the last straw for Cain, or will her desperate measures push them closer together?