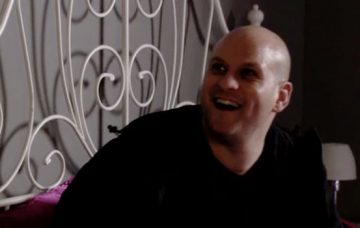 Be afraid, be very afraid!

EastEnders fans were introduced to Halfway’s brother Stuart this week – and the character already looks set to cause a whole lot of trouble in Walford.

Not only will he lead his old friend Mick Carter astray – think LOTS of booze, reminiscing, pranks and tomfoolery – but his relationship with his little bro is far from Walton-esque.

In fact, within minutes of arriving at The Vic, Stuart had already accused Halfway of lying about being a war hero.

Actor Tony Clay, who plays likeable squaddie Callum ‘Halfway’ Highway, has revealed that his character’s relationship with his big brother is complicated at best – and how Stuart’s arrival will affect him.

In an interview with The Sun, Tony hints at a dark family past that explains both Halfway and Stuart’s behaviour…

He says: “Stuart’s brilliant, the character is quite dark but really interesting and it’s a really lovely dynamic between Stuart and Halfway.

“And we get a look into what makes Halfway who he is through his brother with the darker sides of Stuart as well.

“Ricky does such an amazing job, just to come in and make an impact like he has, I think viewers are going to love him.”

In fact, fans were divided with some saying they “disliked him”, that he was “bizarre” and that he was “driving them up the wall”.

Others enjoyed the fact he’s set to cause havoc, writing: “Yes! Stuart has arrived & already causing trouble love it!”

Another tweeted: “Having Stuart around is already looking promising.”

But Tony admits fans should be wary of the newcomer, adding: “But also be a bit scared.”

Addressing how Stuart affects Halfway’s character, Tony said: “You’ll see a change in him, you’ll see he’s been through something that’s affected him and start to see him as he was.

“You start to get a glimpse into what life was like for him when he was younger.

“You get a glimpse of what might have made into what he is today.”

He added: “The relationship with his brother will be quite telling, and that’ll be an interesting thing to watch.”

EastEnders fans can watch the relationship play out over the coming weeks, as Stuart comes between Mick and Linda, as well as Halfway and Whitney.

But what are his motives?

Are you intrigued to find out more about Stuart? Leave us a comment on our Facebook page @EntertainmentDailyFix and let us know what you think!