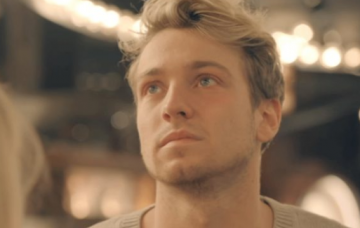 Made In Chelsea fans shocked by Sam Thompson shower scene

One person told the show to "tone it down"

Made In Chelsea viewers were left shocked during Monday’s episode when Sam Thompson and his girlfriend Sophie Habboo starred in a steamy shower scene.

Just minutes into the opening scene after the 9pm watershed, Sam was seen lying on the bed while Sophie took a shower.

Sam then slipped off his towel and joined a naked Sophie in the shower, where they shared a snog.

Read more: Made In Chelsea’s Jamie Laing makes “worst cake ever” with rude decoration on Celebrity Bake Off

It wasn’t long before viewers criticised the show for the “unnecessary” scene.

One person tweeted: “Sam and Habbs snogging in the shower… unnecessary.”

“I was not expecting to see a simulated sex scene when I looked up from my revision,” another quipped. 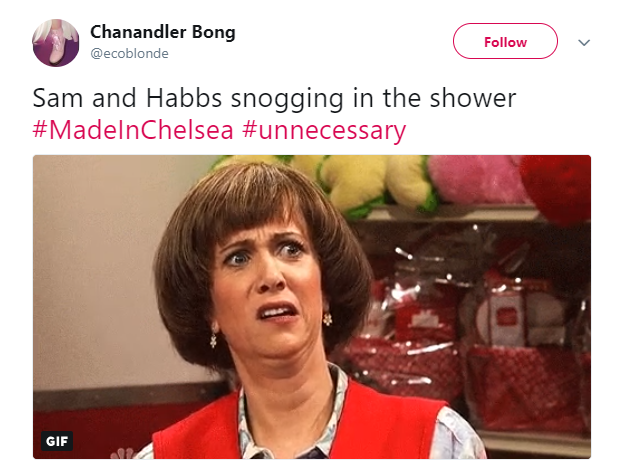 Another called the scene “shameless” and told the show to “tone it down”.

Others said they felt like they were watching an adult film – although, to make it clear, only kissing and caressing was shown! 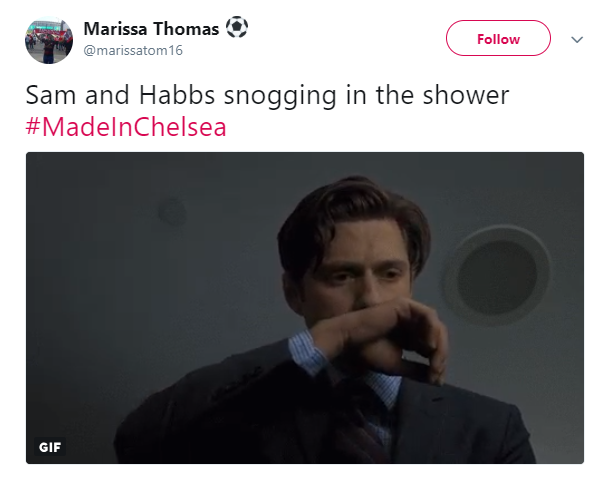 However, some fans quite liked the raunchy scene.

One person said: “@SamThompsonUK I can only imagine the lols that were had filming that ‘I’m great at sex I swear’ shower scene!!”

“Well Sam and Habbs enjoyed that shower together,” another tweeted.

This isn’t the first time viewers have vented their disgust over a steamy shower scene.

Back in 2012, Sam’s sister Louise Thompson indulged in a similar racy scene with her boyfriend at the time Spencer Matthews.

The naked couple were seen kissing and placing their hands suggestively against the shower walls, while surrounded by steam.

They then emerged in their towels and climbed back into a hotel bed.

But the E4 reality show faced backlash as many complained about the show airing the 30-second sexy scene.

Which is your favourite reality show? Leave us a comment on our Facebook page @EntertainmentDailyFix and let us know what you think!

Made in Chelsea Sam Thompson