Love is in the air!

EastEnders fans are convinced there is romance on the cards for Sharon Mitchell and Keanu Taylor after last night’s trip to Walford saw Keanu’s love interest Ingrid the nanny leave the Square.

The pairing of Walford’s First Lady and hot-but-not-that-bright Keanu might seem like an unlikely match, but after the sparks that have been flying between the pair this week, fans are convinced that they’re about to get it on.

Could they be Walford’s new hot romance? 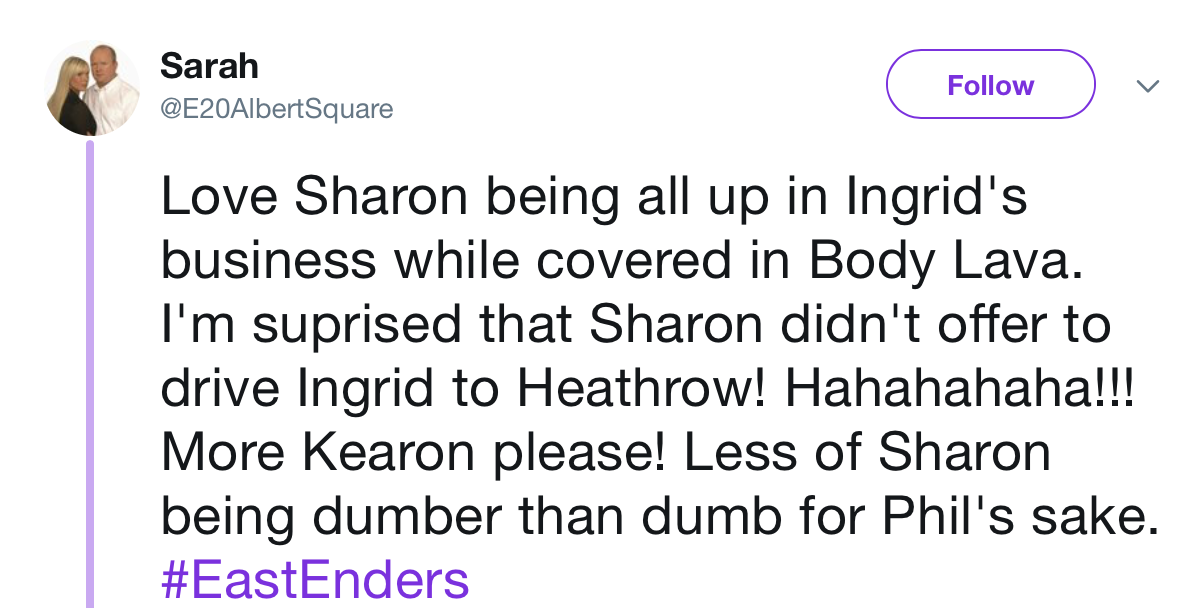 After Keanu almost lost his job at the Arches thanks to a rude customer, Sharon stepped in to save his bacon by teaching the posh client a lesson.

The pair ‘borrowed’ the customer’s car and parked it in Max’s new car lot before calling the police and claiming Mr Branning was selling stolen goods. Talk about killing two birds with one stone!

Phil was seriously impressed with Sharon and Keanu’s Bonnie and Clyde act and Keanu got to keep his job. But that wasn’t the last we have seen of the pair together on screen.

Last night saw Ingrid make the announcement she was going travelling – leaving Keanu heartbroken that she was going before their romance really took off.

But Sharon seemed surprisingly pleased that Keanu was now back on the market by announcing that he should ‘take those abs somewhere they’re appreciated!’ Calm down, Sharon!

With the secret that Phil kissed Mel Owen a few weeks back just waiting to come out, could the revelation that her husband has been unfaithful push Sharon into Keanu’s arms?

Only time will tell!

Can you see Sharon and Keanu together? Leave us a comment on our Facebook page @EntertainmentDailyFix and let us know what you think!