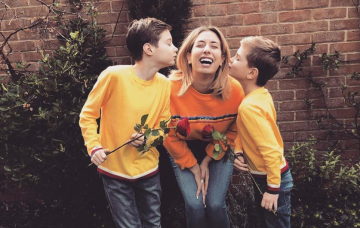 Stacey speaks up for single parents

Stacey Solomon has hit back at Sir Michael Wilshaw’s claim that absent fathers are to blame for the rise in knife crimes, and her fans are completely behind her.

“Dads are neglecting their children and providing terrible role models to their young men who then go astray,” he said.

And now single mum Stacey has used her column in The Sun’s Fabulous Magazine to respond to his claims – penning an open letter to the Ex-Ofsted chief.

“I understand the thought process behind ‘absent fathers are a leading factor in why children turn to knife crime’ – but I don’t accept it,” she begins.

“In that one statement you blame separated parents collectively. Fathers for not caring enough and, in turn, mothers for not doing a good enough job raising their children as a result of becoming a single parent.”

She goes on to point out that it’s short sighted to blame one factor for the rise in violent crime, especially since that one factor does not always lead to violence.

Plenty of children who are raised by one parent go on to lead safe, happy lives.

Stacey highlights several other factors that could be contributing to violent crime – including a reduction in police numbers, lack of community investment, and few easily accessed activity centres such as youth clubs.

She then spoke out for fathers who may not be given a say in how much they get to see their children – or whether they are involved in their lives at all.

“As a father you have to prove your ability to be a father whilst residence, power and control is left solely with the mother,” she says.

She asks why children who feel the need to belong are finding that in gangs, before they find it in their community, and calls on more community support to fill the gaps that lead to children joining gangs.

Stacey ends her open letter with a postscript to single mothers.

“To all of you single mums out there facing the worries of raising children without a man in the house with or without an ‘absent’ father – you’re doing an incredible job,” she said.

“As long as you unconditionally love and care for your children then that is enough.”

Stacey shared her column on Instagram, posting a shot of herself with her two sons, Zachary and Leighton, asking for her fans to comment.

“I actually couldn’t believe what I was hearing and I’d love to know your thoughts,” the image was captioned.

Her fans were quick to respond, with one commenting “Well said @staceysolomon you speak so much sense in a world of nonsense! 👏🏼👏🏼.”

“Do people actually use that as an excuse?!!! Love you @staceysolomon you’re just so down to earth and you think what we think … 😘,” said another.

Another fan said, “Great article….. once again. Blaming absent fathers is too easy, the problem is way bigger than that 😩.”

What do you think about Sir Michael’s comments? Leave us a comment on our Facebook page @EntertainmentDailyFix and let us know what you think!