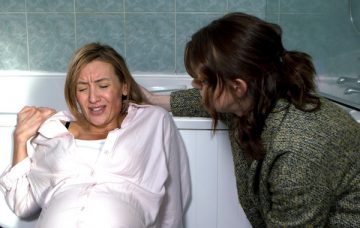 Did you spot the mistake?

Last night’s Coronation Street double bill saw Eva Price give birth to her little girl on the bathroom floor of her cottage.

But it wasn’t the dramatic labour scenes that got fans taking to social media – it was the fact that they’re convinced she’s had the shortest pregnancy ever.

Viewers couldn’t get over the fact the baby was on its way after Eva only discovered that she was pregnant back in January.

However, most fans will remember that while she did discover she was expecting at the beginning of the year, she also found out that she was 17 weeks already.

The news that she fell pregnant earlier than she’d thought is how Eva knew the baby was in fact Aidan’s and not Adam Barlow’s like she originally thought.

Despite this, fans took to Twitter to voice their fury at the fact the soap pregnancy seemed so short…

Now that her baby is here, will Eva change her mind about giving her up to Toyah?

As Eva was taken to hospital following her dramatic labour she resisted holding little baby Susie for as long as she could.

But once Toyah had gone home, the midwife convinced Eva to hold her daughter and it was clear that she was instantly smitten.

With the huge revelation that Aidan’s going to take his own life next week now out, could this tragic turn of events spur Eva to fight for her daughter and leave Toyah and Peter heartbroken?

With Catherine Tyldesley, who plays new mum Eva, departing the cobbles imminently, it doesn’t look like we will have to wait long to find out.

Do you want Eva to keep her baby? Leave us a comment on our Facebook page @EntertainmentDailyFix and let us know what you think!