Heartfelt condolences have flooded in for the Malone family from Channel 4’s hit show Gogglebox after they announced the death of their beloved dog, Frank.

Shaun shared this adorable snap of him cuddling Frank as he announced the family had said goodbye as the 11-year-old dog was put to sleep.

He told his Instagram followers: “After 11 years with the family it was so hard but best thing to do for him we’ve had to put my dog frank to sleep. R.I.P Frankie.”

Fans were quick to offer their condolences as they shared the Malone family’s heartache, saying: “Big hugs to you and the family, RIP Frank sleep well in doggy heaven,” and “They literally are family,” and, simply, “Heartbreaking.” 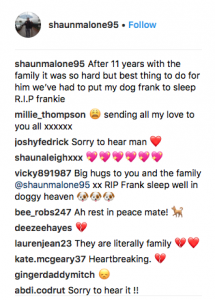 Shaun told fans it was ‘hard’ to see Frank go, but that it was ‘the right thing to do’.

Viewers of the hit Channel 4 show where viewers see the families’ reactions to different TV programmes have been amused for years by the Malone family’s dogs.

They’re lucky to get through a show without being climbed on by the other family dogs Dave, Lucy and Izzie. Frank was often seen snoozing peacefully on his owner’s laps.

Frank had been by Shaun’s side through thick and thin, including a health scare which he revealed in 2016.

Former stage actor Shaun, 21, was rushed to hospital in 2010 after a sinus infection spread into his brain.

His parents Julie and Tom, who also appear on Gogglebox, were told he had a 10 per cent chance of pulling through.

He spent six hours undergoing an brain surgery before coming out in a coma, and underwent six more operations over the next two months, eventually making a full recovery.

He now works as a coach at Manchester United.

Are you a Gogglebox fan? Leave us a comment on our Facebook page @EntertainmentDailyFix and let us know what you think!