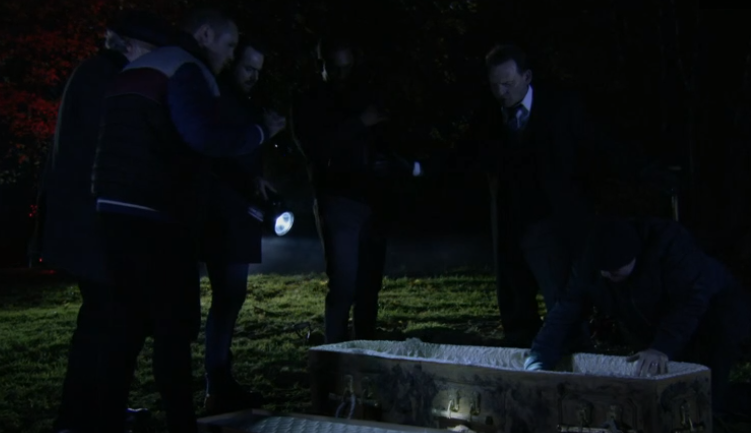 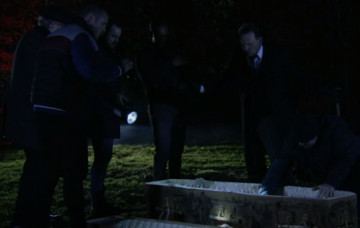 In last night’s EastEnders there was another jaw-dropping cliffhanger in the worst-heist-in-history storyline.

After the hapless gang realised there had been a mix-up with the coffins where the money had been stashed at Billy Mitchell’s funeral parlour, they had to go grave robbing in order to retrieve it.

Recently shot Mick Carter made a miraculous recovery to join Billy and Phil Mitchell, Keanu Taylor, Vincent Hubbard and Aidan Maguire at a graveyard after dark.

There they started digging up the grave of a woman Billy’s business has buried the day before, after the gang had been shocked to find her body inside the casket where they thought their money was hidden.

But once they had managed to retrieve the other coffin, they were stunned once again to find their cash wasn’t inside.

“Where’s the money, Bill?” Mick screamed as police sirens could be heard approaching.

“What are we going to do now?” a terrified Keanu then asked as Billy said he had no idea what had happened to the cash.

The plan’s mastermind then told them it was every man for himself as Aidan urged them all to make a run for it.

So where is the money?

Some believe that Jay Brown must have taken it, since he works at the funeral parlour with Billy.

For his motivation, some think he’s out for revenge on Phil after he lied to him about his real dad, or he could be trying to fund life-saving treatment for his brain-dead friend Abi Branning.

Others reckon Jay’s best friend Ben Mitchell is also in on it, and he could do a runner with the money since it has been well-publicised that Ben is leaving the soap soon. 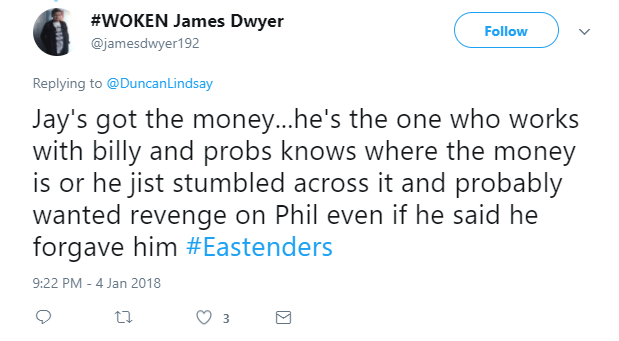 If Jay isn’t the thief, other fans are putting their money on Aidan’s ex Ciara, the soon to return Mel Owen and even Keanu’s sister Bernadette.

Or could it even be a set-up by Aidan to con the gang he assembled?

We don’t know but we can’t wait to find out! However, we’ll have to wait till Monday as the BBC will air an FA Cup match tonight in EastEnders usual Friday night slot.