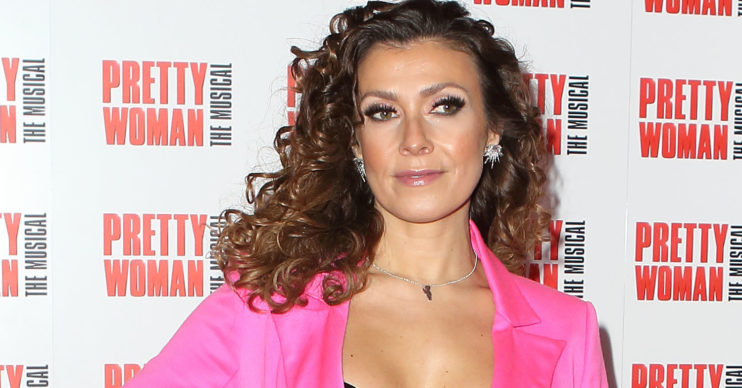 The adorable picture shows a Polly beaming into the camera as they walk their pet chihuahua.

Fans rushed to comment on how beautiful Polly is.

Read more: Kym Marsh denies she is an anti-vaxxer after surprise remark

One wrote: “Polly is so beautiful” and another gushed: “Hey Polly – you are looking really grown up! Hope you enjoy your walk.”

And a fourth commented on her “girl power” shirt: “Loving the girl power top. So true we have power.”

The charming photo comes just a day after Kym shared a selfie with Polly.

Simply captioning the photo with: “My girl”, both mother and daughter are smiling broadly.

One user commented: “Beautiful picture, she’s looking more and more like you.”

And another complemented: “Mum and daughter looking gorgeous in this lovely photo.”

Polly is Kym’s daughter with her ex-husband actor Jamie Lomas.

They also share a son together, Archie, who was tragically stillborn in 2009.

Kym has two older children, David and Emily Mae, from a previous relationship.

Scott is twelve years her junior at 32, but Kym says she doesn’t like him being called a “toyboy”.

Taking to her OK! Magazine column she wrote: “Scott is 32 and I’m almost 44, I hate when people describe him as my ‘toy boy’, as I think it’s patronising to him!

“Men are often with much younger women and no one bats an eyelid, but when it’s the reverse, people seem to judge.

“I’m in the best relationship of my life and Scott and I have so much in common. Age is just a number.”

Kym recently shared her delight at being reunited with Scott, who had returned from his tour of Afghanistan.