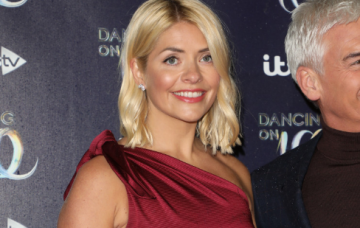 Fresh-faced look is hot, hot, hot according to Insta followers

Holly Willoughby returns to presenting alongside Phillip Schofield this evening – and fans can’t wait for her telly comeback.

The 37-year-old ITV favourite has been taking a short break from the box since returning from Oz for I’m A Celebrity, with Ruth Langsford and Eamonn Holmes filling as hosts most recently on This Morning.

Earlier today she shared a snap on Instagram from behind the scenes of Dancing On Ice which had fans hyped for the new series of the skating show.

And going by the excitable comments she received for her fresh-faced selfie, the light entertainment stalwart could enjoy its highest ratings ever!

Read more: Jane Danson reveals how Dancing On Ice has affected her marriage

Posing by the rink and wrapped up in a heavy coat, the TV beauty dazzled admirers as she gave a sneak peek at the studio set.

Scores of fans were delighted to see her face pop up in their social media feeds – with tens of thousands more giving their approval via the ‘Like’ button within a matter of minutes.

Commenting on Hols make up free look, one follower said: “U look beautiful holly as u always do.”

Another went even further, declaring her as “the absolute most beautiful presenter on tv.”

A third added: “Omg your so pretty.”

And a fourth continued: “What a queen.”

But it was perhaps the fan who joked Holly is so hot she could cause problems for the celebrity contestants that won top marks for comment of the day.

“Stand back Holly you’ll melt the ice,” they remarked.

Still, there’s always at least one buffoon lurking in the comments section – and this post proved no exception.

One troll remarked: “Put some [bleep] makeup on, holly. You’re scaring me.”