Have they spotted a big clue about who's pulling the strings?

Mel’s back in the Square any day now, and viewers are convinced she’ll be coming home to sort out the mess left by the failed heist.

After the police turned up at the Arches during the heist, Aidan’s ex-wife Ciara arrived and sent the cops away.

Then she made a phone call telling the person at the end of the line, to “pack bag”.

She added: “Looks like you’re coming back to your old haunt, love.”

Immediately fans took to twitter to express their conviction that Ciara had phoned Mel.

“I still believe Mel is involved in this scheme,” one viewer wrote.

“No doubt in my mind,” agreed another.

Tamzin Outhwaite, who plays Mel, has said her character is coming back darker and more damaged, with lots of secrets – so it’s definitely possible she could be involved with the heist in some way.

“This time round I don’t like a lot of what she is doing,” Tamzin told Metro. “I like the essence of her, and the substance of her as a human being, but there are decisions she is making that I don’t really like.”

Hmm, sounds like the fans could be right. In fact, some of them are even convinced Mel is the brains behind the whole criminal operation, with one saying she was the “mastermind”. 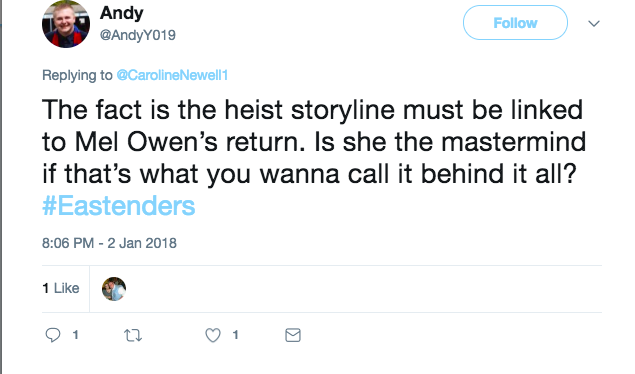 Some viewers, though, were a bit bewildered by the fast-moving storyline, calling it confusing. 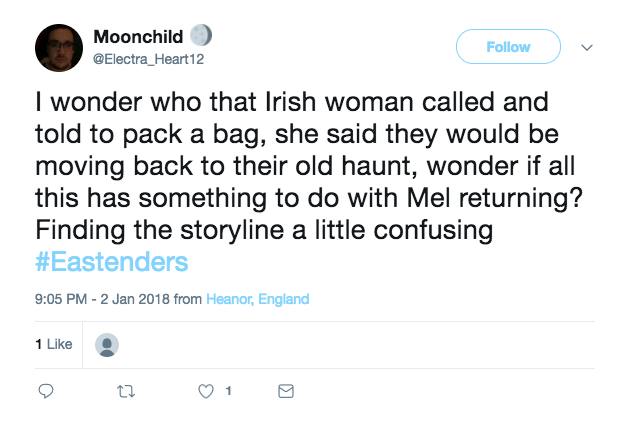 And one independent minded viewer came up with an alternative idea about who Ciara called, writing: “It’s Kat. Not Mel.”

Stranger things have happened in Walford.