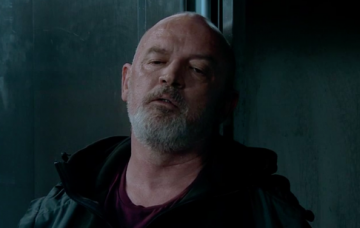 Fans fear that not even a knife to the chest could stop the murderous builder.

The serial killing builder finally got his comeuppance in last night’s episode when Anna Windass returned and plunged a knife into his chest after he shot Michelle Connor.

But in a sick twist, Phelan tried to ruin Anna’s life by pulling the knife out to ensure his death and Anna’s return to prison.

However, despite showing Phelan’s death and his body in a bodybag, viewers are terrified that Phelan survived the ordeal and will return to take revenge, again.

They flocked to Twitter to share their fears with one writing: “He’s not, this is Pat Phelan we are talking about hahaha!

“If he can stay alive after all he’s been through then I’m pretty confident the story will turn out that he had a stab vest underneath his shirt or something. #Corrie #amazing #lovedit!”

A second said: “Don’t care what anyone says 110% positive Pat Phelan is still alive! I am not convinced he died! #Corrie #PhelansRevenge”

Another added: “Wouldn’t surprise me if Phelan turned up alive in a couple of months #Corrie”

However, actor Connor McIntyre has confirmed Phelan did die – and he’s glad about it.

Asked if he was happy Phelan died, he said: “Yes. The viewers deserve that pay off because love him or hate him, we’ve taken them on a fine year odyssey and we’ve frustrated them, entertained them and delighted them in equal measure so it had to reach a conclusion.

“And I also feel it had to be conclusive because it had to square the circle in terms of the Anna story; she had to be involved to put those scales in balance.

“The next baddie, whoever that may be or whatever form that may take, needs to get on with their business instead of it being about whether Phelan is still around.”

Connor also revealed how Phelan planned to make Anna suffer for the rest of her life with his death as part of a sick game.

He said: “That’s real spite. We see earlier that he has made his mind up that the game is up so he gives Anna a little snigger before his eyes go and really nobody has won.

“The snigger is not about anything other than him winning, going out on his terms to the very end.”

He added: “He knows because he has done it, that you don’t kill somebody and not pay for it.

“In his narcissism and his love for control, he knows that he has traumatised them all.”

Do you think Phelan is still alive? Leave us a comment on our Facebook page @EntertainmentDailyFix and let us know what you think!