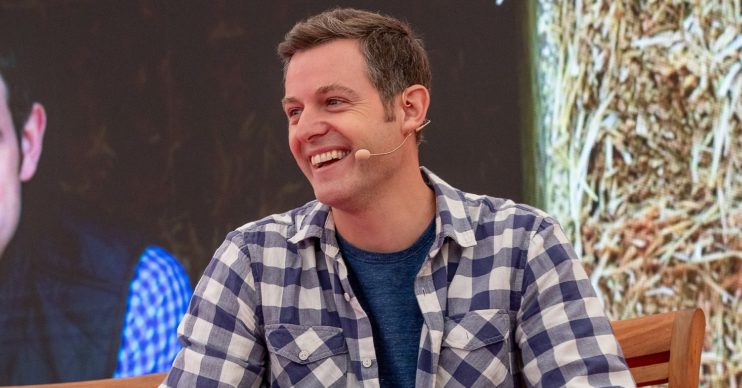 TV’s Matt Baker left fans in a state of shock over his athletic prowess in his latest Instagram post.

The former host of The One Show decided to kick off his weekend by having a bash at performing a handstand – but with a dangerous twist.

Matt climbed on top of his car and managed to balance himself impressively on just two hands, to the surprise of his followers.

He captioned the clip: It’s international handstand day, one of my favourite days of the year.”

While performing the move, he warned: “Don’t try this at home.”

One fan responded: “Well done! Although you are a little crazy!”

While a second impressed follower replied: “How on earth do you do this so easily? Brilliant!”

Another fan called him “bonkers”.

Read more: The One Show: Viewers have surprising reaction to shock axe of Victoria Derbyshire

The presenter teamed up with Alex Jones for one final episode of The One Show on March 31 before heading off to pastures new.

Sadly, he wasn’t able to physically be in the BBC studio for his last ever episode.

This is because he was self-isolating after a member of his family started experiencing symptoms of coronavirus.

Matt said he decided to leave the show after nine years to spend more time with his family.

“I’m looking forward to having dinner with my family and being able to put my kids to bed,” he said in a statement.

“I’ve loved that The One Show has been such a big part of my life for the last nine years.

“It’s been brilliant to showcase the eclectic mix of Britain, meet incredible people along the way and witness so many lives changed with the annual Rickshaw Challenge for Children in Need.”

Momentous day my first ever artwork is on sale its up for auction tonight. I’m donating it to Chris Evans auction to raise money for the NHS The auction is live now and finishes at midnight tonight just go to bidinauction.com and have a look at the incredible stuff that’s on offer – if you don’t fancy my honey bee you could always place a bid on @taylorswift s guitar or @sirrodstewart s watch all the money raised is going to make scrubs. @thefrothycoffeeman #NHS

Matt added that he’d like to “thank all those I’ve worked with over the years and especially you, the viewer, for showing me so much support during my time on the green sofa.

“I’m excited about other opportunities that come my way.”

The BBC is yet to replace Matt on the sofa.

BBC Matt Baker The One Show