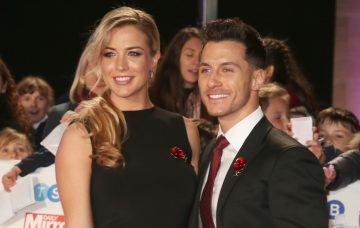 Couple got together after meeting on Strictly

Gemma Atkinson and Strictly Come Dancing boyfriend Gorka Marquez have been urged by fans to “get married and have babies” after sharing their latest loved-up photo together.

Posting a snap on Instagram of the couple cuddling up on a clifftop in the Strictly pro-dancer’s native Bilbao in Spain, Gemma wrote: “Today Gorks showed me his old school, where he learnt to surf, the local parks, his favourite coffee shop and his mums beach house. Bilbao is beautiful.”

Hundreds of fans flooded the pair with replies wishing them a merry Christmas, or “Feliz Navidad” in Spanish, and urging them to tie the knot.

Today Gorks showed me his old school, where he learnt to surf, the local parks, his favourite coffee shop and his mums beach house. Bilbao is beautiful ❤️ @gorka_marquez

Another pleaded: “Such a beautiful fairytale, really hope he gets down on bended knee on Christmas morning.”

A third posted: “Hurry up and get married, although you two are showing the world that true love still exists and good men AND women are still around.”

Someone else joked: “If they don’t get engaged, it’s gonna ruin my Christmas.”

One fan added: “Put a ring on it you lovely people!!” while another replied: “Oh just get married and have babies already please.”

Referring to the winner of I’m A Celebrity… Get Me Out Of Here! who often expressed his undying love for wife Sandra in the jungle, somebody wrote: “You’ve found your Harry Redknapp.”

And another said teasingly: “You took him to Blackpool and he takes you to Bilbao! #MustBeLove.”

The couple took the huge step of moving in together last weekend, just over a year since meeting in the BBC1 ballroom.

Sharing the news with their Instagram followers alongside a clip of them driving home, Gorka began: “Sunday morning, on our way back to Manchester because we are…” before Gemma, 34, excitedly chipped in: “We’re going to be roomies!!!”

Had THE best Birthday weekend topped off with fun times in Blackpool and a stroll on the beach. Thank you everyone for all the Birthday well wishes, my family, friends and Gorks for making it so special and for all my lovely gifts. Let’s see what 34 has to offer! Excited 😊❤️

After they return from Bilbao, Gorka will be living in the home Gemma shares with her two beloved dogs, Norman and Ollie.

Fans congratulated them in their droves and commented on an image of them sharing a pizza during the move.

Gemma was paired on last year’s Strictly with Aljaž Škorjanec while Gorka’s celebrity partner was Alexandra Burke. Both made it to the series final.