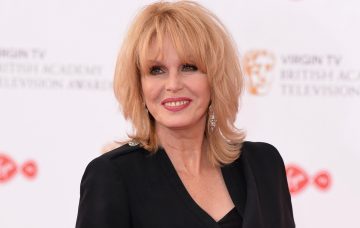 How did this happen?!

Joanna Lumley has landed herself an exciting new TV job but it’s left some of her fans utterly baffled.

ITV announced on Wednesday that the actress, 72, will host an one-off hour-long special to celebrate The Black Eyed Peas’ 20th anniversary.

ITV revealed the show will be “both a music special and portrait of one of the biggest groups in the world” and is set to air later this year.

The special will feature exclusive performances of some of the global supergroup’s greatest hits.

Meanwhile, a host of celebrities and famous faces from the music industry, as well as the band’s friends and family that have shaped their lives, will share their insights into the group and what makes them such a special act.

Speaking about hosting the show, Joanna said in a statement: “I’m both a friend to and a big fan of The Black Eyed Peas.

“It’s very exciting to be part of this and I’m looking forward to it enormously.”

It wasn’t long before people took to Twitter to share their thoughts on Joanna’s new job, with many completely confused as to why she’s hosting the special.

One person wrote: “I don’t understand why this is happening, or why Joanna Lumley is hosting it. But I’m down with it & will be watching intently.”

I don’t understand why this is happening, or why Joanna Lumley is hosting it. But I’m down with it & will be watching intently. https://t.co/hIhCI2HPNI

Another said: “How is #joannalumley a friend of #blackeyedpeas to be presenting a special show on them?? I feel like I need a TV special on that first!!”

How is #joannalumley a friend of #blackeyedpeas to be presenting a special show on them?? I feel like I need a TV special on that first!! pic.twitter.com/LLTst19zbT

Others shared GIFs expressing their confusion.

Others were quick to defend Joanna hosting the special, with one person claiming that Joanna has interviewed will.i.am and that’s how they became good pals.

People thinking wtf about joanna lumley presenting a show on the black eyed peas yes its random but she interviewed will a few yrs ago on the bbc and they became close friends,yes it is odd but we dont choose who we get on with it just happens

i love Joanna Lumley and I love the Black Eyed Peas! An unanticipted collaboration but one i will most definitely be watching!

The show will delve into the band’s childhoods as their friends and families share their memories on how they watched the group grow.

The band will also be taking a trip back to their childhood neighbourhoods and to the club where they were discovered.

will.i.am said in a statement: “I have my family, my Black Eyed Peas family and my Voice UK family.

“I’ve always felt at home in the UK and, as a group, we continue to feel Big Love from our fans over here. We are excited to be sharing the backstory of our journey to success with you all.”

apl.de.ap – real name Allan Pineda Lindo – added: “It’s very special to be celebrating this landmark moment in The Black Eyed Peas story. There’s nothing better than performing with my best friends on stage.

“We’re looking forward to everyone joining us for this party, and we know our UK fans know how to party.”

Taboo – real name Jaime Luis Gomez – said: “Twenty years of Black Eyed Peas and so much more. will.i.am and apl.de.ap are my brothers.

“We have incredible memories to be treasured and we’re excited for everything to come with the ‘Masters of the Sun’ European tour.”

Katie Rawcliffe, Creative Director, ITV Studios also said: “will.i.am is a much-loved part of the ITV family and we are delighted to be producing this one off special that pays tribute to one of the world’s greatest groups. Combined with the wonderful Joanna Lumley, this will offer a unique celebration of twenty years of the Black Eyed Peas.”

Will you be watching the one-off special? Leave us a comment on our Facebook page @EntertainmentDailyFix and let us know what you think.