What does this mean for the character's future?

EastEnders fans were amazed when the heist thief was revealed at the end of last night’s episode – as it wasn’t who everyone had suspected.

When the gang of robbers discovered their loot was not buried in a coffin last week, many had believed Jay Brown was responsible for double-crossing them.

But last night it was revealed that it is in fact Ben Mitchell who is hoarding the cash!

He’s had it hidden in a suitcase in hospitalised Abi Branning’s room, which explains why he flipped out when he found housemate Donna going through her things to find an old photo.

Viewers were delighted by the turn of events with one writing on Twitter: “Ben took all the money??! Wow” and another exclaiming “what a plot twist!”

A third said: “I am genuinely shocked (in a good way).” 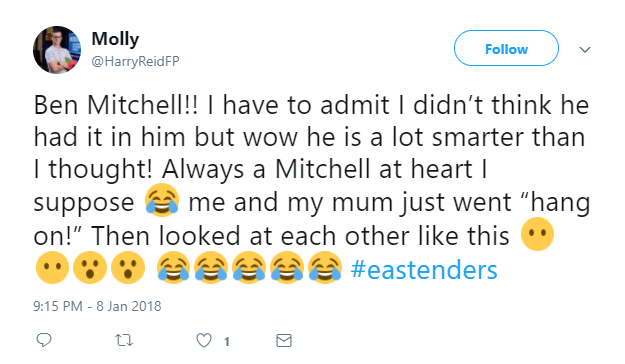 Now fans are speculating over what it means for the character’s future, as it is well known Ben, played by Harry Reid is leaving Albert Square soon (sob!).

He’s been axed as part of returning executive producer John Yorke’s shakeup. So will he leave the door open for him to return, or will he meet a grisly end thanks to his thieving?

Some believe it could be the latter if Aidan Maguire wants revenge, others even think his dad Phil Mitchell could turn violent if he finds out his son stole from him.

Others think Ben could be working with Aidan to ensure Phil, Billy Mitchell, Vincent Hubbard, Keanu Taylor and Mick Carter don’t get their cut. 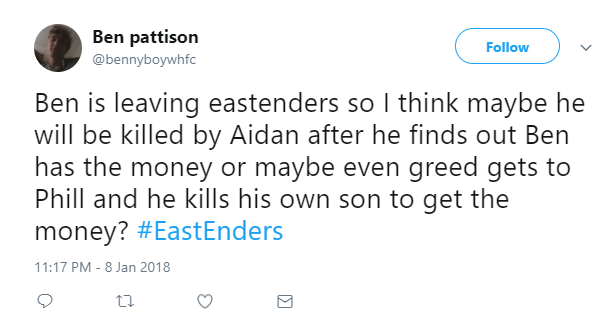 Or given a detective was in The Square last night to investigate the robbery, could Ben be found out and be put behind bars? Or will he take the money and run?

Whatever happens, Harry, who has already filmed his exit, said fans won’t be disappointed.

He said: “In terms of (Ben’s) mindset, it’s quite a sudden thing. I’m not gonna say anything, mainly because I want the fans to be excited and question what’s going to happen.

“It is exciting. Ben’s life is exciting and it won’t let you down, I promise you that.”