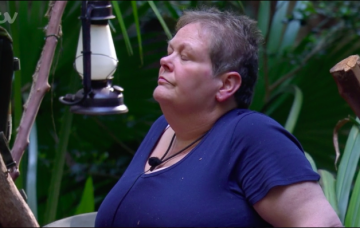 The Chase star had the right answer

Given Anne Hegerty’s whole career is in professional quizzing, you’d think she’d be the first port of call for any general knowledge questions – but it wasn’t the case on Saturday night’s episode of I’m A Celebrity… Get me Out of Here!

Viewers took to social media to moan that The Chase star was being “ignored” when it came to answering Kiosk Kev’s question.

After successfully completing a challenge in the jungle, Emily Atack and John Barrowman were given the chance to return to camp with biscuits and tea.

Kiosk Kev rang the group, who were napping. Rita Simons answered the phone, where Kev greeted her: “G’day! Your campmates, Emily and John have won this afternoon’s Dingo Dollar challenge.

“But in order for them to bring back the prize, you must answer the following question correctly.

“In a recent survey, what percentage of British men would like to be in a polygamous marriage?”

The EastEnders actress repeated his question to the group, along with the two possible options of 12 per cent or five per cent.

Quiz star Anne, 60, jumped in to explain that polygamous marriage means more than one wife, adding: “Maybe I’m a cynic, but I’m inclined to go for the higher number.”

The rest of the group completely ignored her though, and jumped in to say five per cent. Nick Knowles even shouted: “We’re all going five.”

It was wrong, and Kev slammed his kiosk shutters down in Emily and John’s faces. The pair stomped off into the woods, shoving over his sign as they left.

Back in the camp Rita revealed that Kev had hung up on her, calling him a “rude [bleep].”

Fans complained that Anne – who has Asperger’s Syndrome – had had been ignored without even a courtesy consideration of her suggestion.

One wrote: “They should use @anne_hegerty’s answer! She is the smartest woman in uk. I’m wondering if it’s because she has a mental health issue, the reason why they ignore her…”

Another added: “Why wouldn’t you listen to the person who’s actually a quiz master 😂 #imaceleb.” While a third said: “Is it me or does it look 👀 like that @anne_hegerty is being ignored and left out? #ImACeleb #ITV.”

A fourth moaned: “When you realise Anne Hegerty has got every dingo dollar challenge question right #ImACeleb.”

What better way to learn your lesson, than being deprived of biscuits? We’re betting they’ll listen to Anne next time…

Do you think the camp should listen to Anne more? Leave us a comment on our Facebook page @EntertainmentDailyFix and let us know what you think.