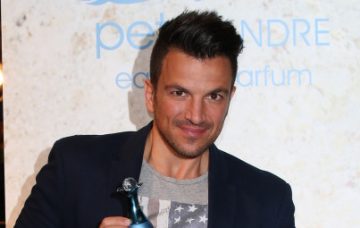 Junior seems to be every inch the budding musician!

Peter Andre asked his fans for help with his son Junior, as he uploaded a video of the 12-year-old rapping in the back of the car.

Confused dad Peter captioned the hilarious video, “I mean… what do I… I just… but… it’s just” while Junior can be seen singing along to a fast rap song on his phone.

But instead of flocking to give dad-of-four Peter any advice, fans were really impressed with Junior’s vocal skills, referring to him as ‘a star in the making’.

“Your face at the end Peter – classic! But I have to say, Junior is good,” one comment reads.

Another follower agreed, “You don’t look impressed there Peter. Great MCing though!”

Some fans also quite rightly pointed out that Junior takes after his dad!

“Ah come on Peter, the apple doesn’t fall far from the tree,” joked a follower, and another added, “Bless Junior – a little heart-breaker. So much confidence when I saw him on stage with you.”

This isn’t the first time we’ve heard him sing, or indeed rap!

Last month Peter, 45, uploaded a hilarious video of Junior dancing in the kitchen, which he caught on camera from behind a closed door.

And last October, Peter’s ex-wife Katie, who is Junior’s mum, also uploaded a video of him and little sister Princess, ten, singing a cover of Justin Bieber’s ‘Love Yourself’ – much to the delight of fans.

When you catch your son thinking he’s all gangsta. Help

In 2016, Junior also performed a rendition of his dad’s most famous hit ‘Mysterious Girl’ when appearing on Loose Women.

Peter, who also has daughter Amelia, four, and son Theo, one, with wife Emily MacDonagh, has even hinted at the possibility of doing a duet with his son for a charity single in the near future.

“I’ve recorded him in my studio at home and will record something with him for charity when the time is right,” Pete has said.

Katie and Peter’s eldest son has also been recently accepted into a school specialising in drama and sport, and Peter is adamant that he wants Junior to finish his education, like his dad made him, before getting too starry-eyed.

When it comes to business though, there is no denying that Junior also takes after his mum, Katie.

In February, the confident near-teen signed his first modelling contract, as the face of his very own clothing label.

Are you a fan of Junior’s rapping? Or do you think he’s too young to be in the limelight? Leave us a comment on our Facebook page @EntertainmentDailyFix and let us know what you think!