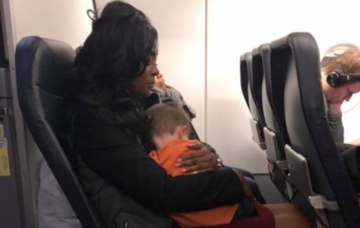 A stressed mum has shared a touching photo of a stranger she’s called an “angel” who comforted her son on a flight.

Becca Kinsey was “on the verge of tears” as she boarded the aeroplane with her two young boys following a trip to Disney World.

She was travelling without husband Blake and says her five-year-old son Wyatt was “screaming” and two-year-old James was “exhausted”.

After two acts of kindness by strangers in departures to make sure they got onboard, a third woman came up to her 45 minutes into the flight after Wyatt had cried himself to sleep.

The stranger offered to have the child on her lap for the rest of the journey because Becca, from Dallas, Texas, “looked like she needed a break”.

Posting a photo of the stranger cuddling her son on Facebook, the thankful mum wrote: “So I thought it was a good idea to fly by myself with a 2 yr old and a 5 year old.

“We were standing in line in security, on the verge of tears because Wyatt was screaming and James was exhausted.

“Out of the blue, one mom stops the line for security and says ‘here, jump in front of me! I know how it is!’

“Wyatt fell asleep and I was trying to carry everyone’s carry-on when another mom jumps out of her place in line and says ‘hand me everything, I’ve got it’.”

Read more: Tom Fletcher shares adorable snap of his two boys as they go on holiday before welcoming another sibling

Despite the pair helping to get the trio to their seats, Becca added: “To top it all off, Wyatt starts to scream at take-off before he finally falls back to sleep.

“After about 45 min, this angel comes to the back and says ‘you look like you need a break’ and holds Wyatt for the rest of the flight AND walks him all the way to baggage claim, hands him to Blake, hugs me and says ‘merry Christmas!!'”

Have you experienced a similar act of kindness? Leave us a comment on our Facebook page @EntertainmentDailyFix and let us know what you think!

Grantchester returns to ITV1: Here’s everything you need to know about the sixth series